Mystery, empathy, a sense of the world of women, personal and universal experiences seep through Janice Sztabnik’s obscure but emotive figures. They slip in and out of focus, approach or recede, but always stay covered behind a veil of abstraction.

“The figure is what grounds the work. Pure abstraction I don’t consider myself successful at because I have to have some reference to the figure. Whether or not the viewer sees it, there are figures, there’s a face, there’s a profile, there are elements of the body.

“I put something away, and then I’ll say ‘there’s something still missing,’ and I go back.”  In “Hands of Time, Yours and Mine,” the outlines of several fish were incorporated. “It brings to me a sense of prayer and a more spiritual element.”

Sztabnik’s rich colors simultaneously anchor and launch her paintings. A face outlined in ocean blue might be filled with grassy green and orange, yellow and turquoise hands reach out. “Sometimes I get on myself for having too much color and then I pull back and I’ll try to do something with limited coloration.” It won’t last, she has realized. “I find that I just get carried away.”

Two women walk away in a painting titled “UPC Skirts 2.” They’re indistinct, yet recognizable. Above them hovers a barcode. “When my daughter left for college I found myself doing this…it was based on women and relationships and the diversity of what that means to each person, so anything from familial to marital or beyond…also, I like the combination of high and low art. I was very influenced by Dada.” 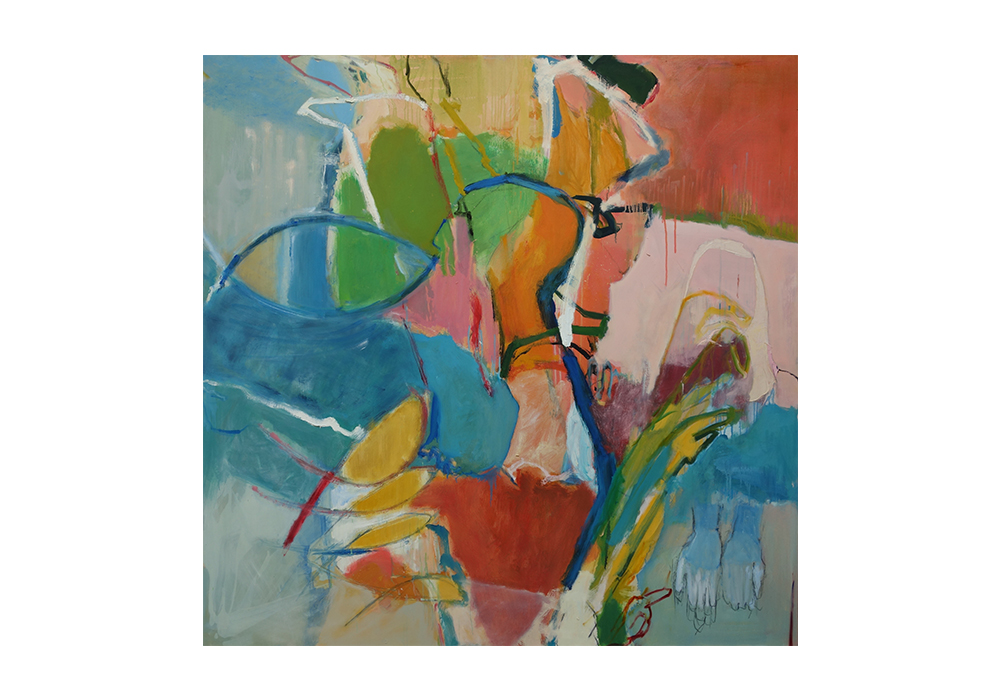 Yet while Sztabnik’s elements may protect their privacy, they’re anything but random. UPC codes are part of daily life, but they’re also numerical, mathematical, commercial, a way of coding. “It’s about how do you identify yourself as an individual in the complexity of all other women? I could be anybody to a lot of people and still I think of myself as unique and individual. It’s trying to figure that out. You’re so influenced by some of the elements that you grow up with, even though you don’t control those, even though you try to cross those barriers and deal with them.”

Her paintings offer glimpses of clarity and ambiguity. They’re like recreated snapshots of a moment filled with emotion, the origin of which may never be known. Sztabnik collects mental images culled from everything in her life. Family, popular culture, headlines and the long history of art, from primitive masks to Rembrandt etchings to the latest issue of a magazine, all filter into her consciousness and onto the canvas.

“Everything’s here,” she pointed to her head. “That’s my computer. That’s why I like keeping my books, collecting different images from random places…it collects up here and then I think about how I can make it.

“Through painting I’m able to really convey emotion. And it’s not necessarily that I tell a story, it’s more to put that into paint somehow.” Memories, love and loss all find their voice through the strokes of her brush. “If you look at my work, I hope that you would see the totality…they’re about components of time within the context of my life. I’m hoping people see not the pain, they see beauty. It doesn’t really matter if they understand the whole narrative or the elements from it, but it’s important for me that I’m portraying something that’s truthful.”