Something there is that doesn’t love a wall,
That sends the frozen-ground-swell under it,
And spills the upper boulders in the sun;
And makes gaps even two can pass abreast.
—Robert Frost

So begins Frost’s poem “Mending Wall.” When an immigrant curator and an immigrant artist began discussing a massive outdoor art exhibition for the city known as a melting pot, Frost’s poem came up. And its most famous line would become the title of their groundbreaking exhibit. Good Fences Make Good Neighbors opened in October. It’s the work of dissident artist Ai Weiwei, described alternately as the most famous, most dangerous and most powerful artist in the world, and was organized by Nicholas Baume, director and chief curator of the Public Art Fund.

Multicultural, challenging, sophisticated work by an iconic artist that deals with important subjects in thoughtful ways is right in Baume’s wheelhouse. And he’s not in the least surprised that it’s the creative output of immigrants. “We’re a city and nation based on immigration. It’s not exceptional to be an immigrant here, it’s actually very much who we are…The choice of Ai Weiwei and the themes in this exhibition are incredibly timely,” Baume said. “Anti-immigrant feelings and sentiments are washing around the whole world. Ai Weiwei developed this project very much in response to New York but also seeing New York and the U.S. as part of this global story and in a sense trying to wake people up and give people the inspiration to speak out and to participate.”

Good Fences Make Good Neighbors is the Public Art Fund’s most expansive exhibition to date. More than 300 works of art by Ai, from photographic banners to massive sculptural structures, are being presented throughout all five boroughs. Each addresses the ideas of borders, walls, refugees and immigration. It’s a significant and signature exhibition chosen by Baume and the Public Art Fund to celebrate its 40th anniversary, one that took years to come to fruition, in part due to Ai’s incarceration and a travel ban imposed upon him by the Chinese government—thus it is subject matter close to the artist’s heart.

“Ai Weiwei’s own life story is very much one of the experience of displacement,” Baume explained. “From his early childhood when his father, who was a famous poet in China, was purged in the Cultural Revolution and he and his family were banished to the provinces and his father was made to do hard labor…Weiwei felt, already as a child, what it’s like to be exiled within your own community.”

“I was an immigrant in New York in the 1980s for ten years and the issue with the migration crisis has been a longtime focus of my practice,” said Ai in his artist’s statement. “The fence has always been a tool in the vocabulary of political landscaping and evokes associations with words like ‘border,’ ‘security’ and ‘neighbor,’ which are connected to the current global political environment. But what’s important to remember is that while barriers have been used to divide us, as humans we are all the same.”

Ai has called the exhibition “a love letter” to the city, stating, “The beauty about New York City is the coexistence and the tolerance and the sharing.” Among the works he’s sharing are an enormous gate situated under Washington Square Park’s arch. It’s reflective literally, made of highly polished metal, but also intellectually, inviting the audience to see themselves passing through. At the southeast edge of Central Park, in Doris C. Freedman Plaza, a massive golden structure made of bars contains portals and questions. It’s a huge gilded cage in which viewers entering it voluntarily confine themselves. It’s transparent, so those inside can look out and those outside can look in. The parallel is what each of those situations say. 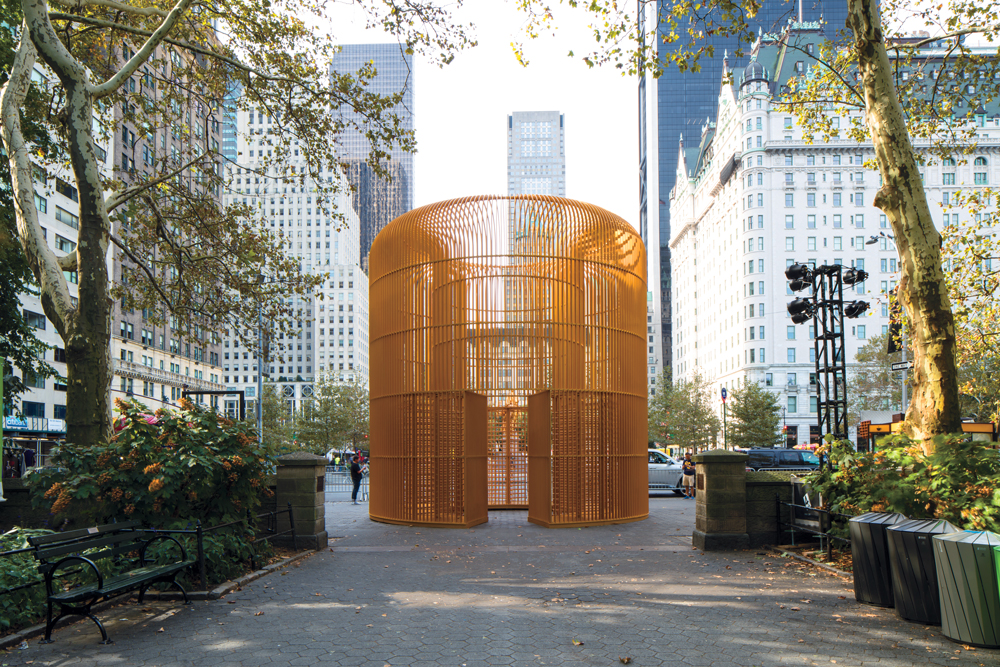 “It’s about imagination. It’s about experiential emotion. What Ai Weiwei does brilliantly is he manages to take a tough, challenging subject and make work inspired by that that also opens up to a broad audience. It doesn’t lecture people. It doesn’t hit them over the head. It really is much more about giving people an artistic experience and engaging them in these issues at the same time.”

In Baume’s immigrant story, the city plays a starring role as well. Though he never dreamed as a student in Sydney, Australia, that he’d be curating here, he admitted, “The myth and charisma of New York certainly reached me from afar.” In 1998, Baume arrived in the U.S. to take the post of contemporary curator at the Wadsworth Atheneum in Hartford, Connecticut. After five years, he moved to the chief curatorial position in Boston’s Institute for Contemporary Art and from there came to head the Public Art Fund. The fund, founded by Doris C. Freedman in 1977, is known for putting up some of the most stunning, ambitious public exhibitions in the city’s history. Public Art Fund artists have built waterfalls under the Brooklyn Bridge, upended a swimming pool and built a four-story tall sculpture made of flowers at Rockefeller Center, they have enhanced the cityscape in countless striking and subtle ways.

Mounting free, outdoor exhibitions for New York is challenging, Baume said, but the payoff is tremendous. “Creativity and creative expression are an integral part of any vibrant, democratic society…For a child who doesn’t have the privilege of being taken to museums to have that door opened into this world of creative expression, or to have a commuter just going about their daily business who suddenly is able to see a place they’ve walked by a million times as if they’ve never seen it before, or for a couple of strangers to be looking at work at the same time and spontaneously start a conversation that they would never have had otherwise, those can be profound experiences…The experience may be ephemeral but the effect may be lasting.”