Artist, storyteller, musician, activist, philosopher, author and the teacher. In both his life and the scope of his polymathic talents, Romare Bearden was the quintessential renaissance man. Bearden was a key figure in the Harlem Renaissance, a piece of history—local, social, musical, literary, cultural and artistic—that shone with a brilliance like the Parisian Belle Époque or Amsterdam’s Golden Age.

Primarily known as a printmaker and collagist, Bearden documented his life and culture in images filled with passion, empathy, grace and power. His works are layered with color and technique, meaning and metaphor. The consummate artist’s work incorporates influences of African art, European Modernism, classical mythology, contemporary literature and perhaps most of all, jazz.

Romare Bearden: Storyteller at the Hofstra University Museum presents 22 prints that are color-saturated and refined, yet have an ember-like radiance. Filling the Emily Lowe Gallery, Bearden’s hues seem to vibrate from the walls. Cobalt blue seas, periwinkle skies and the rich brown of earth create landscapes populated by black figures that reach across history, continents, reality and imagination. Behind all of them are Bearden’s uncompromising artistic vision and desire to tell stories.

“What was primary to him was the story. And then, ‘How do I tell it in my way?’ Some of the story is the process of making these works,” said Nancy Richner, the director of the Hofstra Museum. “He didn’t ever settle…He was always searching, trying again, retracing and revising. In this day and age, where we expect the quick response, he reminds us that there are many ways of solving problems.” 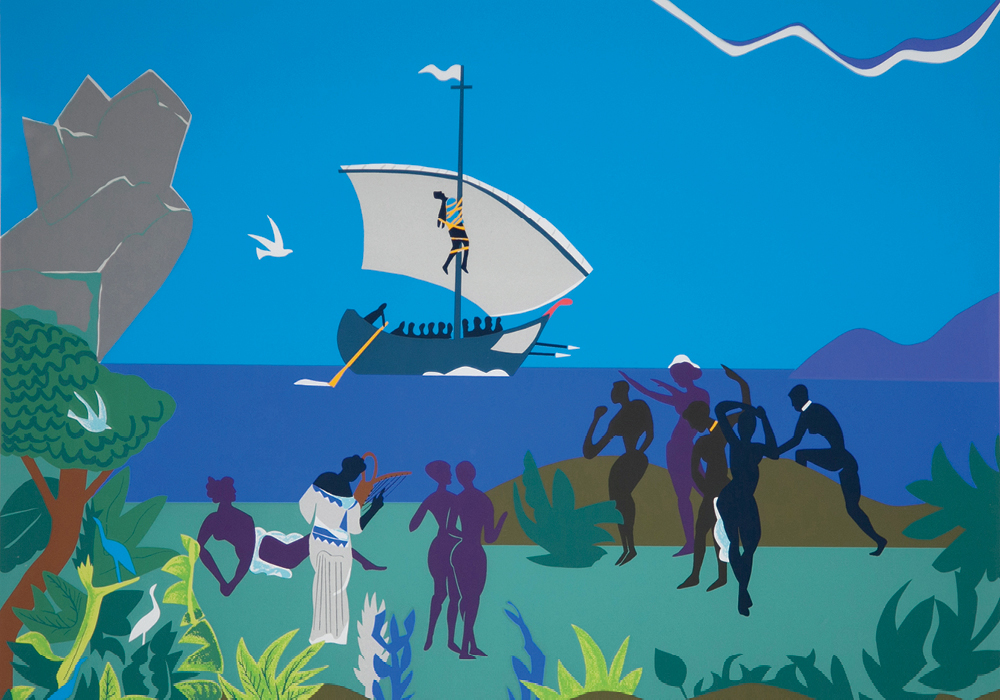 Romare Bearden was born in 1911 in Charlotte, North Carolina, to college educated, relatively well-off African American parents, who, like many, left in the Great Migration north to escape discrimination. By the 1920s, the family was in the center of the Harlem Renaissance. Bearden’s mother was a trailblazing female journalist and his father was an accomplished musician. Bearden grew up in a circle of family and friends that included Paul Robeson, Duke Ellington, Langston Hughes and Dizzy Gillespie. After fighting in World War II, he traveled to Europe to study philosophy at the Sorbonne and art in Parisian cafes and the studios of Georges Braque, Constantin Brancusi and Henri Matisse. Back in New York, he was a social worker for the city and an activist for human rights and racial equality.

“Black art has always existed,” Bearden once stated. “It just hasn’t been looked for in the right places.” So he decided to place it squarely in the center of post-war American art. “Around 1965 he started working in collage. That medium really lent itself to the type of work he wanted to do,” said Karen Albert, chief curator and deputy director of the museum.

“The Family” brings together painting and drawing, collage (popularized by Cubists), the bold colors of Fauvism, jarring Surrealist figures where outsized hands and heads supplant bodies, Matisse-like cutouts, and found images from newspapers and magazines reminiscent of Rauschenberg. It’s both a history of Modern Art and a portrait of African American culture. 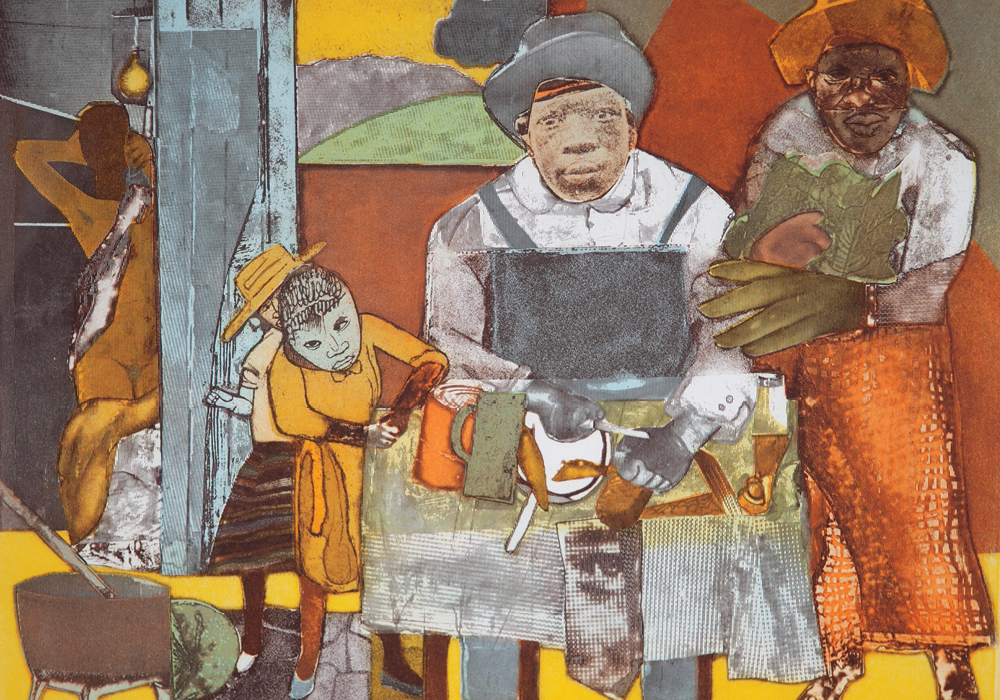 Bearden’s group sits for a meal at a humble table. There’s a wall cutting the space vertically. On one side, a stylized black nude female figure stands under a light bulb. In front of her is a kettle. She could be read as a nurturing goddess, a sensual Odalisque, a mysterious conjure woman or a symbol of motherhood. Through Bearden’s deliberate ambiguity, she voices all of those. The dichotomy between the mysterious or unexplained and the universal, recognizable ritual of taking meals creates a tension and endless possible interpretations.

The five versions of “The Family” on display reward careful, slow looking. “If you look at the face of the child at the table, you see Bearden went back and added details as he worked. You can see slight differences. Some of it was emphasis. He also changed the color of the inks. He was never satisfied,” Albert said. “Bearden was trying to depict the African American experience, his personal experience, and was trying to find ways to connect that to more universal themes.”

One of those themes is travel, as seen in a beautiful series named “Odysseus Suite.” In these, the artist re-imagined Homer’s epic tale, presenting black figures as the heroes, depicted in ways that recall Greek vase paintings from antiquity. In another work, “The Train,” of which multiple versions are on view, the idea of travel repeats, bearing echoes of the Underground Railroad, the Great Migration and the freedom that trains represent. 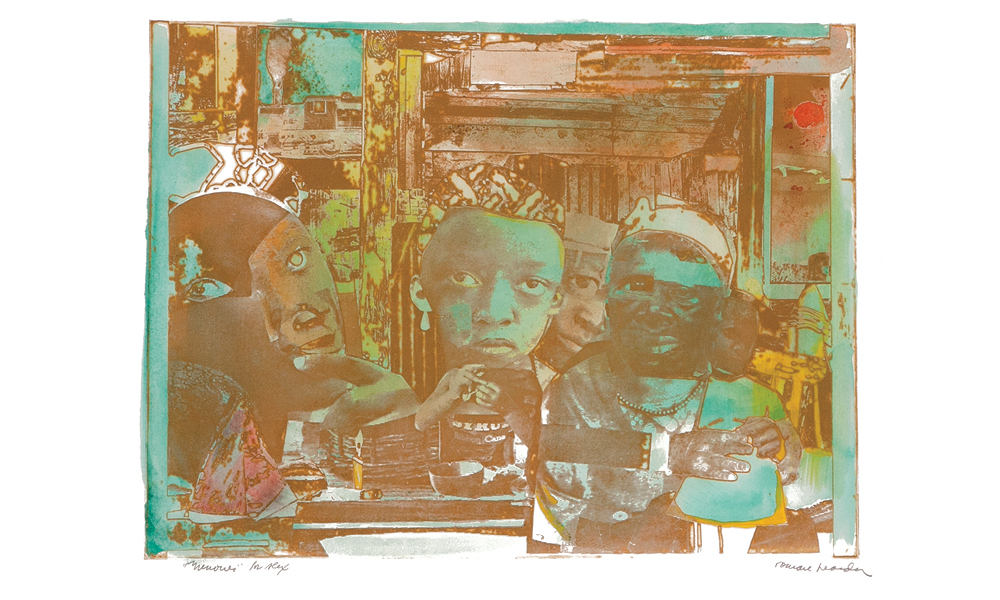 Through photoengraving, etching, lithography, silkscreen, collage, hand painting, screen printing and his own invented techniques, Romare Bearden created more than a new visual vocabulary. He created artistic possibilities and ripples that are still felt. True to Jazz, he riffed on many earlier artists, borrowing methods and meaning from everyone from Matisse to the ancient Greeks. Other artists returned his call. August Wilson’s play The Piano Lesson was inspired by Bearden’s “Homage to Mary Lou (The Music Lesson).” Branford Marsalis composed music, collected in the album Romare Bearden Revealed, after seeing a Bearden exhibition. Contemporary art stars like Kerry James Marshall, Mickalene Thomas and Kehinde Wiley have taken up supplanting European heroes in paintings with African American figures. Harmonia Rosales recently made headlines when she painted her own version of Michelangelo’s Sistine Chapel ceiling, filling the heavens with women of color.

Bearden’s works are like conversations across time. Creating discussions that involve artists and audiences in critical thinking is the goal of the Hofstra University Museum, Richner said. “We need to constantly be re-examining. Nothing is monolithic. I think that’s what we’ve learned in the 21st century.”