When Thomas Halaczinsky arrived in New York from his native and reunified Germany in 1991, he was dismayed by the rundown docks and aging warehouses lining the city’s waterfronts. The neglect inspired him to buy a sailboat, Sojourn, and familiarize himself with the many islands from Brooklyn to Orient Point and beyond. His travels led to a 2016 picture series that earned him an honorable mention at the Tokyo International Photo Awards. Those images grace the pages of his new book Archipelago New York. Published by Schiffer, the literary and pictorial logbook takes readers on a ride to places such as Broad Channel, New York Harbor and Fishers Island near the Connecticut-Rhode Island border. I caught up with Halaczinsky to talk about his new book and what he feels readers will takeaway.

Congratulations on publishing Archipelago New York. How does this book tie into your previous work as a writer, photographer and documentarian?
In my work, I have focused on the relationship between people and places. I am interested in how people are shaped by the places where they live. A few years ago I made a documentary about Coney Island and the people who live and work there. I admired the strong emotional connection they have to their neighborhood and how that grounds them. That’s an ongoing theme in my work. I am trying to capture that in my landscape photography, my stories and the films I make.

How did the neglect you encountered on the waterfronts when you first arrived in New York inspire you to buy a sloop and set sail around the city and Long Island?
When I arrived in Manhattan in the early 1990s there was hardly any access to the New York waterfront, which was cut off by the Westside Highway and the FDR Drive. The old docks and storage buildings were dilapidated which had some sort of dark charm, but I really wanted to experience the city from the water. This is before the Internet and Google Maps. I had found some sea charts of New York that showed islands like North and South Brother in the East River, or Swinburne and Hoffman in the Lower Bay, and I was curious about those abandoned places. I had been sailing before I came to New York and from day one [when] I arrived in the Big Apple, I wanted to sail the waters around New York.

In addition to describing dozens of islands, waterways and your nautical accounts, your book offers fascinating and little-known historical tidbits. Who or what were your main sources for these tales?
First and foremost, people who I interviewed about the history of the islands of the archipelago New York, ranging from historians, sociologists to fishermen and other sailors, are always good for a hilarious story. Secondly, books, particularly old and often forgotten books, such as the story of Venture Smith, an African prince who was enslaved on Fishers Island and was one of the first to leave a written account of his life story. 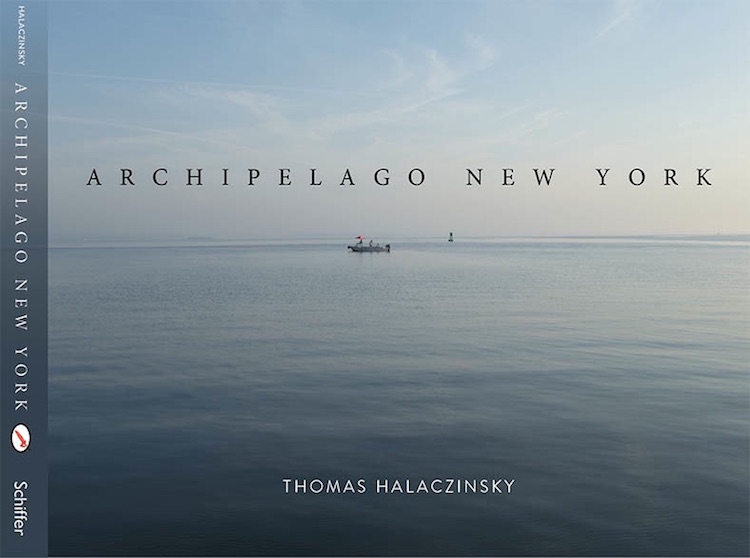 Archipelago New York is a literary and photographic logbook by sailor Thomas Halaczinsky.

Can you talk more about how your love of sailing was born on Coney Island?
For years I didn’t have a car in New York City and the only beach easily reached by subway is Coney Island, so that’s where I went in the summer. There I often saw sailboats cruising along the shore. As I said, I had been sailing before I came to New York. Seeing those boats come by really made me crave to get back onto the water. But there were no boats available. I remember one trip to City Island, where you supposedly could rent a boat, but when I came there the place had closed down for good.

Elaborate on the new relationship you’ve observed New Yorkers form with their waterfronts since September 11, 2001.
The fall of the twin towers made New Yorkers painfully aware that they lived on an island. All bridges were closed, the subway shut down and almost half a million people were evacuated from the island by boat. [September 11] was very traumatic for everyone who was there. I actually saw the towers fall from my kitchen window in Brooklyn and thought that this was the end. For people in Manhattan that I spoke to, it was particularly distressing that they felt trapped. Many were surprised by that and had never thought of what it meant to live on an island during such a catastrophe. If something that you cannot change has such a traumatic effect on you, the only way to process that is to own what leaves you powerless and frantic. I truly believe that embracing Manhattan as an island, the creation of beautiful waterfront parks and the notion of people to get on to the waters surrounding the island was fueled by that.

In addition to inspiring readers to appreciate and explore the vast archipelago surrounding them, what might New Yorkers/Long Islanders find most intriguing about your book?
We live in busy times, traveling from place to place. One day we are in Beijing; the next in Paris. As wonderful as that is, one thing can get lost in this. It is what I call a sense of place, a feeling of being rooted and a certain gravity that stems from a connection to the place where you live. For me sailing the archipelago of New York, often alone, was very much also an inner journey in search of that sense of place and I hope that people will be able to take away a little bit of this experience for themselves. On top [of that], it is outright fun and entertaining. There are so many cool stories here and New Yorkers and Long Islanders are excellent storytellers. I am sure, reading my stories, everyone will just find a little piece of him or herself in those tales.