There are yachts, and then there are mega yachts, and then there are superyachts—the biggest of the big, most luxurious of the luxe, the floating playthings of the multimillionaires and billionaires who embody the astute words of J.P. Morgan: “If you have to ask how much it costs, you can’t afford it.” But you can take a peek inside and sometimes even book a week on board to catch a taste of the seafaring good life aboard some of the most luxurious superyachts in the world.

In 2017 this 272-foot-long opus launched as the largest-ever luxury yacht from Dutch builder Amels—making her a milestone for one of the foremost superyacht builders in the world.

This new Amels flagship is a study in what it takes to live the good life afloat, built for a co-owner who previously had 154- and 213-foot yachts and who used what he learned during his cruising experiences to create his new toy. 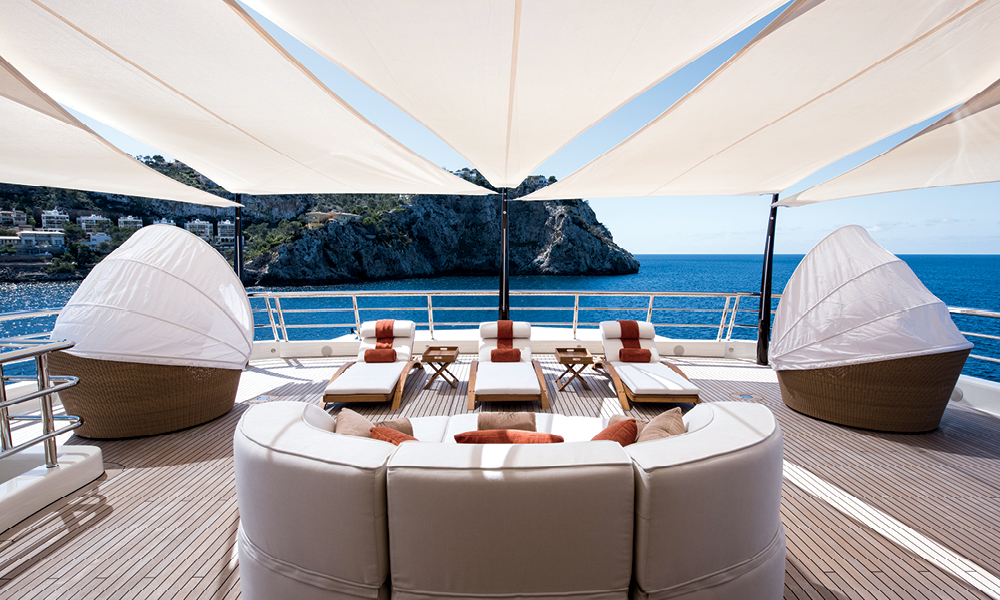 The aft deck provides perfect views of the sunrise or whatever other beauty passes along the horizon.

In sheer size, Here Comes the Sun is staggering, with more than 10,000-square-feet of exterior space and another 15,000 of interior space. And the shipyard packed all of those spaces with play areas for adults and kids alike, everything from an infinity pool with a bar to an elevator, theater and a beach club with fold-down terraces and spa.

Yes the name of the yacht is a nod to The Beatles; gold record homages to the band’s Let It Be and John Lennon’s Imagine hang on the wall of the co-owner’s onboard office. (His previous yachts were named for those songs.)

But beyond the Fab Four, it’s the Terrific 12, if you will, who get to enjoy this yacht. That’s the number of guests her staterooms accommodate for charter. The master and a VIP suite are on the upper deck with sweeping bird’s-eye views of whatever anchorage is on the itinerary for that day. Two additional VIP suites and three guest staterooms are on the main deck, also with views from above water level. The suites can convert to form other combinations of staterooms, depending on the needs of the guests. 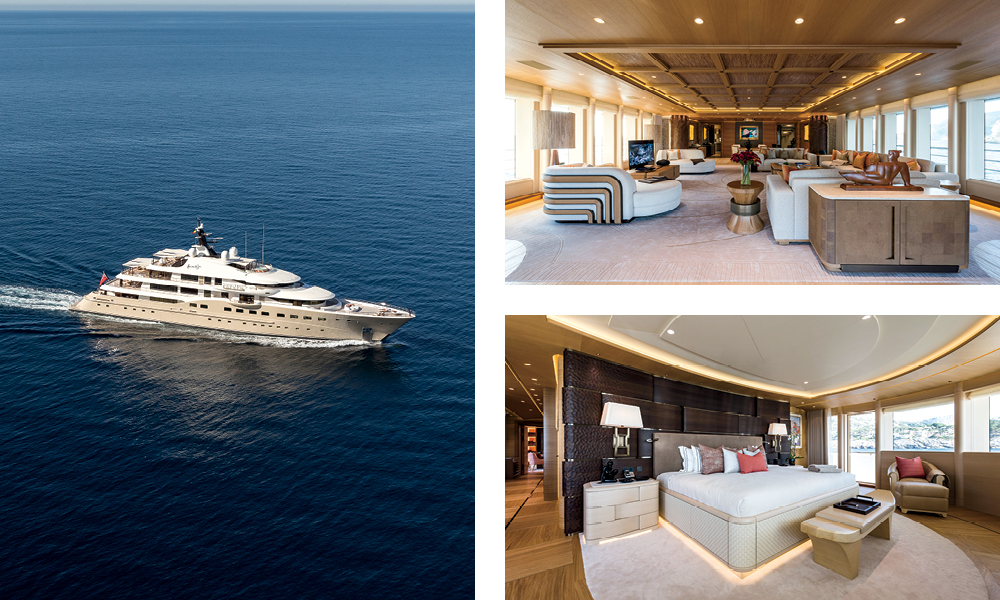 The 272-foot-long Here Comes the Sun. / The deck lounge. / The superyacht’s master stateroom.

Here Comes the Sun is built to run with 24 crew, creating a 2-to-1 ratio of crew to guests for any type of service that may be required. The yacht’s designer incorporated hidden passageways throughout the yacht, allowing crew to remain out of the way while always being close at hand.

In terms of décor, the co-owner wanted a beach-style ambience, which is why Winch Design used neutral tones along with rounded furniture, natural woods and natural-fiber carpeting such as silks and wools.

Here Comes the Sun is chartering in the Mediterranean this summer. Luxury yachting company Fraser is offering her for charter at a weekly base rate of about $1.5 million. The yacht is expected to move to the Caribbean for the winter 2018-19 season. 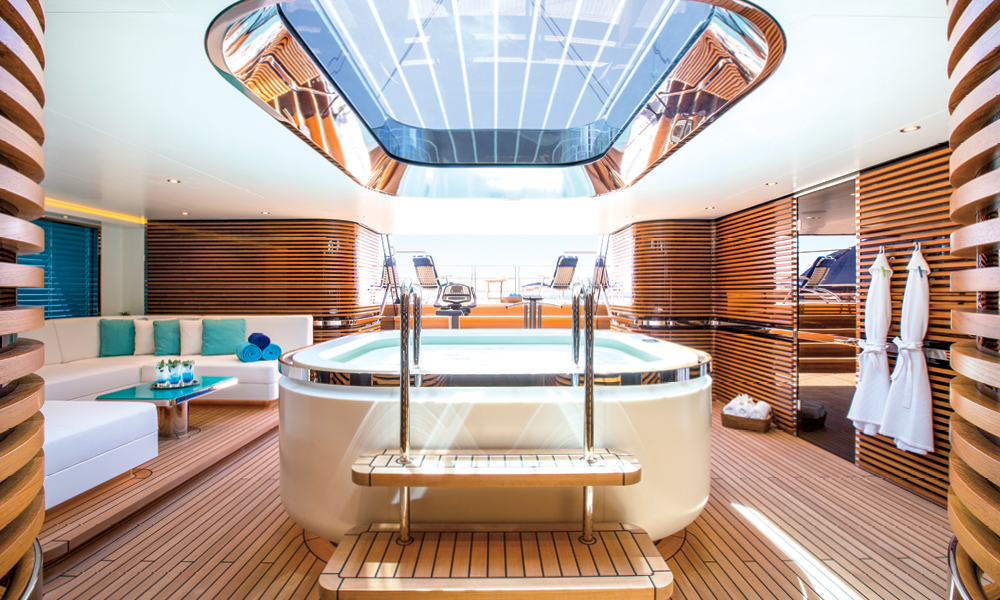 It took not one, but two premier Dutch shipyards—Vitters and Oceanco—to bring the 282-foot Aquijo to life in 2016.

Vitters has long been known as a top builder of sailing yachts with serious performance characteristics as well as fine interior craftsmanship. Oceanco is responsible for some of the biggest motoryachts in the world, including the 361-foot Jubilee, which is the largest yacht launched in The Netherlands to date.

In building Aquijo, the two shipyards came together to produce a super-sized sailing yacht that has many onboard amenities similar to those aboard motoryachts. Aquijo is designed to offer all the exhilaration of sailing a large yacht at higher speeds, while at the same time being outfitted to offer all the creature comforts available on some of the world’s largest power-driven superyachts.

Guests can relax in Aquijo’s water-level beach club with a sauna and steam room, the type of space that is virtually unheard of aboard sailing yachts of any size. At the same time, those who love to sail get fun features including a steering system that makes the yacht respond fast, like smaller performance yachts do—even when Aquijo’s huge hull is flying through the water at 17 knots. 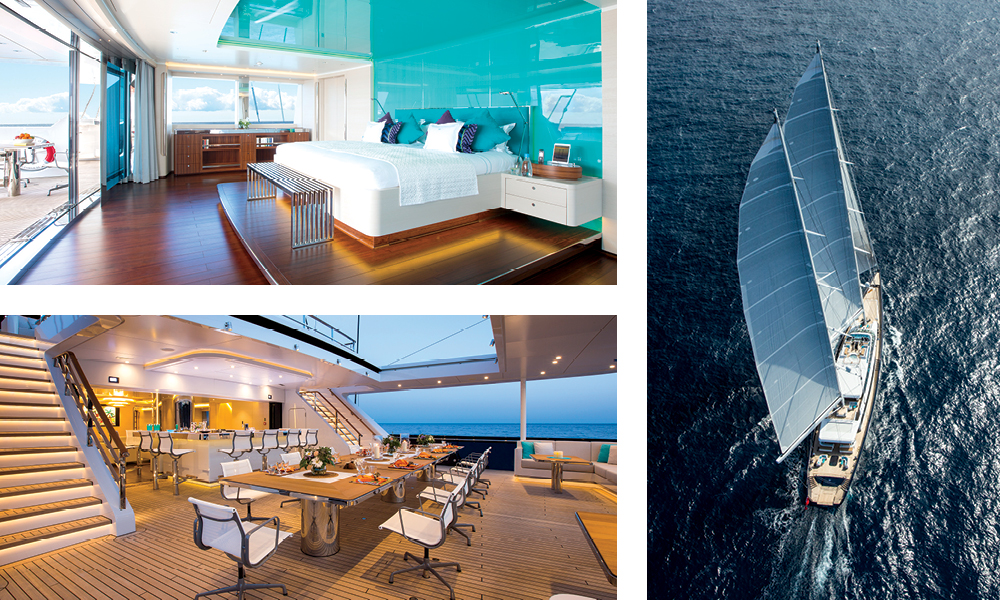 The yacht features seven staterooms and an aft deck bar and dining area. / At 282 feet long, Aquijo is the world’s largest sailing yacht.

And the word “huge” doesn’t apply only to Aquijo’s bottom. Each of her masts is a staggering 299 feet tall. She is the world’s largest high-performance ketch, an engineering feat that left many yacht-spotters staring up with their jaws dropping after she launched.

Y.CO, which markets Aquijo at a lowest weekly base rate of about $557,000, said she is the only sailing yacht available for charter anywhere in the world that has an elevator. The company said features like that are getting the attention of charter clients who usually book larger motoryachts—an almost unheard-of phenomenon, as sailing yachts typically are in far less demand.

Aquijo accommodates 12 guests in seven staterooms, one of which is designed to accommodate a wheelchair. Out on deck, the yacht’s swim platform lowers into the water, making it easier for people of all ability levels to get in and out for a swim or a float on a raft.

This summer, Aquijo is expected to cruise in the Indian Ocean, Southeast Asia and the South Pacific, including heading to some lesser-traveled tropical destinations such as New Caledonia. The views from the indoor/outdoor bar on the yacht’s aft deck should be spectacular, even if she is bigger than some of the islets where the captain might drop her anchor. 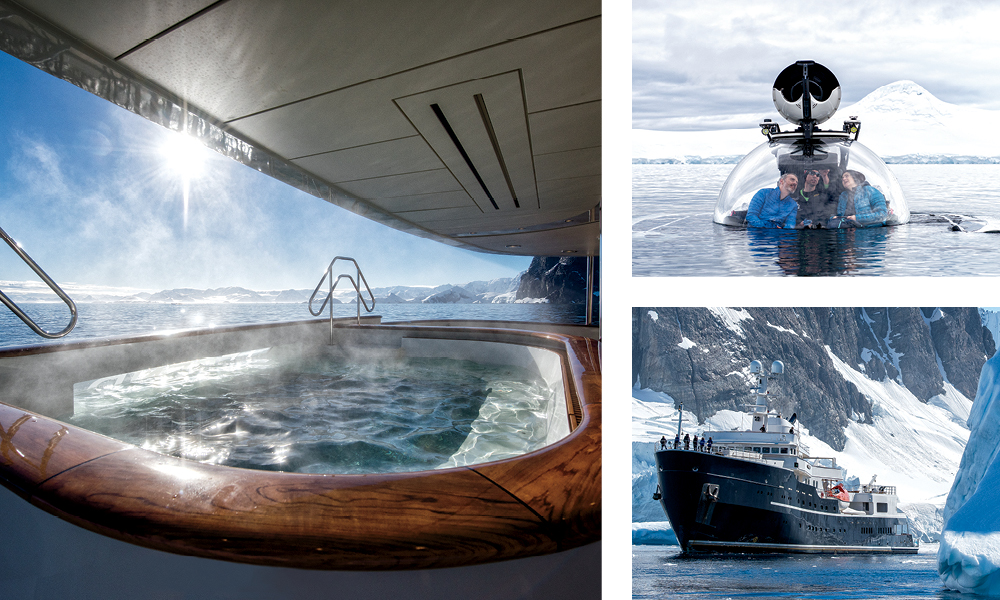 When the cold gets too much, head to Legend’s Balinese spa for a dip in the jacuzzi. / Spend an adventurous day exploring the seas in Legend’s submarine. / The former ice-breaking ship ventures where most yachts don’t dream—the Arctic.

There is only one charter yacht in the world that used to be a Soviet ice-breaking ship: the 253-foot Legend. And her owner is putting her tough, Class 1 ice-breaking hull to good use, alternating the summer and winter seasons in Antarctica and Greenland, taking charter clients to destinations that most other yachts simply cannot access.

“Antarctica is a place that you cannot really describe,” said Kevin van Luijn, the yacht’s staff captain. “You have to see it with your own eyes. It’s the feeling of everything—of being alone, of being with nature, of being with wildlife that is not scared of you, but that is coming close to you to see what you are. It’s a very special feeling. People will put their phones away. They just want cameras for taking pictures and they stop and enjoy life.”

Built in 1973, Legend underwent a complete rebuild in 2015-16, keeping her rugged, go-anywhere attributes intact while adding a luxury yacht interior. She can accommodate 26 guests in 13 staterooms and has room for 19 permanent crew. An additional 10 berths are available for specially trained expedition crew members, who, depending on the client’s interests, can include doctors, ice pilots, naturalists and more.

For the ultimate in guest relaxation, Legend has a Balinese spa, cinema, swimming pool and gymnasium on board. Coming equipped for adventurous fun in some of the most remote places on earth, she also has a helipad, submarine, dry suits for cold-water scuba diving and heli-skiing equipment.

Military-grade tenders are also part of the package. They give guests a safe way to get off the big yacht and down to eye level with some of the most far-out creatures in the natural kingdom. “To be close to the killer whales—you can nearly touch them—it’s magical. They just play around with you. They’re friendly.”

Camper and Nicholsons International offers Legend for charter at a lowest weekly base rate of about $569,000. Itineraries are also available this summer throughout the Baltic Sea. Luijn said that during Legend’s most recent journey to Antarctica the yacht proved her ability to explore places where other vessels are forced to stop. “We were in a bay, going to another bay and a ship was going to pass us. They called us and asked to pass, and they came back again a day later in the other direction. They said there was too much ice. They could not continue. We just went through the ice to where we wanted to go. Legend is special. She can do anything.”