Art museums are vast repositories of treasures, where paintings and sculpture are appreciated from a safe distance and the “dialogue” between viewer and art is spoken in a public forum. Prints, on the other hand, tell quiet stories, up close and very personal. Such intimate observation can be most rewarding to those who look closely. For more than 500 years, notable artists like Dürer, Rembrandt, Goya and Picasso have given form to their artistic vision and conveyed the tastes and concerns of their time through their prints. While today their paintings may be most familiar, it is the prints of these artists that represent their most personal and often finest artistic expression.

Related Content
Laurie Anderson Goes Up and Away at Guild Hall

Even before Albrecht Dürer, whose first engravings and woodcuts were made in the 1490s, there lived a handful of artists working in the late Gothic style. Their faith and fantasies were depicted with narratives from scripture and antiquity; the chivalry of the age in pageants and balls; earthly heaven and hell in domestic scenes both tranquil and tumultuous. Today these precious works on paper comprise a 15th-century scrapbook, offering a glimpse into the medieval mind at the dawn of printmaking, which began in the second quarter of the 1400s.

The urge to collect them can happen gradually or all of a sudden. For this writer, the study of 15th-century Northern European painters like Rogier Van der Weyden led to the discovery of contemporary engravers and woodcut designers. But while the best 15th-century paintings are ensconced in the world’s great museums, prints from the same period are only occasionally available to collectors seeking the earliest rarities of the printmaker’s art.

Technically, a print is an impression of an image on paper, transferred from an inked metal plate or wooden block. In an engraving (our subject here), a copper plate on which the artist incised an image is covered with thick ink, the surface of the plate wiped clean and ink remaining in the engraved lines is transferred to a sheet of moist paper when the plate and paper are sent through a roller press under pressure. The process, when repeated, produces identical impressions of the image. Most engravings from the era are small—averaging the size of a postcard—although some are as tiny as matchbooks and others as large as a placemat. Usually printed in black ink only, they can have all the delicacy of the finest line drawing. Paper color and texture play a critical role, the best paper looking like a sheet of warm, cream-colored ivory. 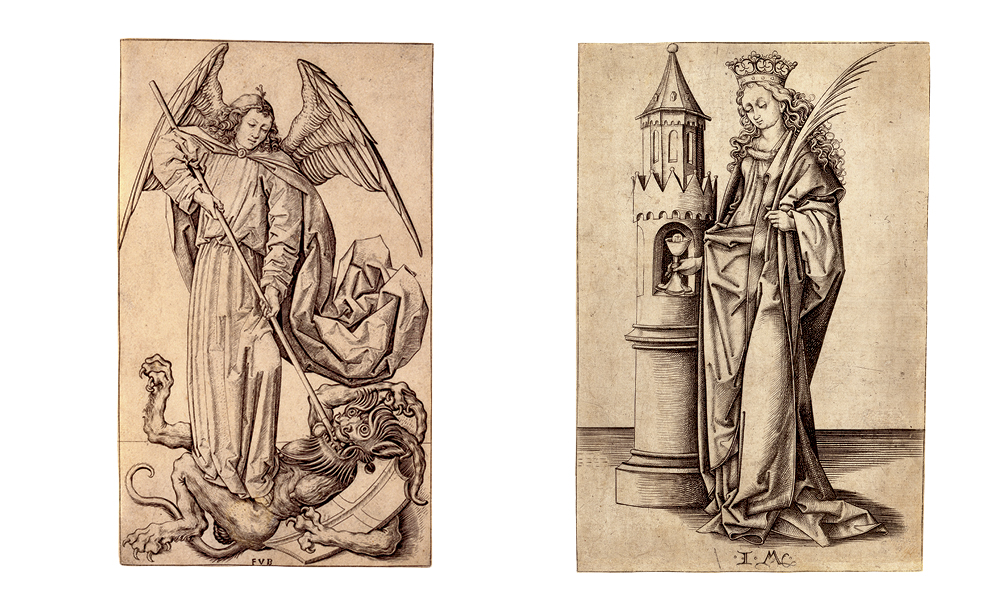 If, to judge from the art on permanent public view, museums appear to hold fewer prints than paintings and sculpture, the opposite is often the case. However, because prints and works on paper are generally sensitive to light, they are commonly stored in lightproof containers called Solander boxes and only exhibited for limited periods of time.

A census of all 15th-century Northern European engravings was compiled by the German art historian Max Lehrs. Completed in 1934, his magisterial nine-volume survey records the location of every impression of every engraved image known at the time, which numbered in the thousands. Today it is estimated that approximately 3,100 different engraved images have survived, attributed by Lehrs and subsequent scholars to about 70 different artists or workshops. Most artists are identified only by monograms, initials or house marks engraved in their plates and are known by names like Master FvB, Monogrammist AG or Master W with the Key. Others are named by major collections holding their prints, such as the Master of the Berlin Passion, or by a stylistic attribute, like the Master of the Mountain-Like Clouds. The identities of these different hands are unknown and may never be recovered. An exception however, is the undisputed genius of the age, Martin Schongauer, a painter and engraver whose delicate figures and exquisite compositions pushed the limits of the engraver’s art. Notably, he was greatly admired by the younger artist Dürer, who unsuccessfully set out to meet him in 1492 (Dürer arrived in Schongauer’s native city of Colmar shortly after his death in 1491). With 116 prints to his name, Schongauer’s output was prolific and consistent. As many as 50 impressions of some of his prints exist today.

Many 15th-century prints exist in unique impressions—only one example survives—and finding one of these is a rare treat. The majority exist in fewer than 10 impressions, and a glance at Lehrs tells us that most have been subsumed into print rooms in New York, Washington, London, Berlin, Amsterdam, Paris, Vienna and other important museum print rooms.

Therein lies the thrill for the contemporary collector.

Since focusing on early prints in the mid-1990s, I have been fortunate to come across a small number that are either known to survive in single impressions or which are only recorded in institutional collections, effectively rendering them unique—at least to the art market, since museum holdings are not likely to be deaccessioned. Regardless of rarity, a collector aspires to acquire a print in which four criteria are met: the image is exceptional (superbly conceived and executed by the artist); the quality of the printing is outstanding (it is an early, rich and even impression); the condition of the print is very good (most 500-plus year old prints have been damaged, some have been skillfully and deceptively repaired or even re-drawn); and the provenance is known (collector’s marks or notes, usually on the reverse, can sometimes reveal a trail of ownership going back to the 1500s).

Hence, collecting prints from the 15th-century poses challenges to collectors with a philatelic mentality; those minds that must “fill every space with a stamp” will be disappointed. For while it would be theoretically possible to acquire—over a lifetime and at considerable expense—almost all of Dürer’s 102 intaglio prints, or the majority of Rembrandt’s nearly 300 etchings and drypoints, it is impossible to amass a complete body of work produced by artists from the generations prior.

One of the pleasures of collecting is visiting the major print rooms around the world and spending hours viewing the sheets in each museum’s collection. Museum print rooms are pleased to show material to collectors and interested amateurs by appointment. Cultivating a keen eye is the key to enjoyment. Looking at such notable collections offers invaluable lessons in connoisseurship.

Building a collection of early engravings is an exciting pursuit, and sourcing desirable prints requires the diligent commitment of time and resources. A small handful of dealers in Europe and North America occasionally offer material, and auctions are another good source. Some of the greatest opportunities for discovery come from following smaller auction houses in Europe, especially Germany. Print fairs like the annual IFPDA show in New York or the London Original Print Fair afford an opportunity to meet dealers, see their best offerings and stay top-of-mind when material comes to market.

Like the availability of the prints, the population of Old Master print collectors has diminished greatly in recent decades. What once was a widely shared passion is now generally regarded as the prerogative of odd antiquarians and academics. Yet for this enthusiast, there are few art experiences more pleasurable than surrounding oneself in a room filled with the music of Dufay or Ockegehem and a host of saintly martyrs, fantastic monsters and courtly ladies peering out from their frames. Being the custodian of such rare treasures is an honor and an obligation to future generations of admirers.