When one thinks of spending the day out East, wine on the North Fork and beaches to the south are top of mind. But there’s more than rosé to be had on the roads of Long Island’s peninsulas. Cocktail enthusiasts can rejoice in more than one stop for spirited refreshments on the East End. 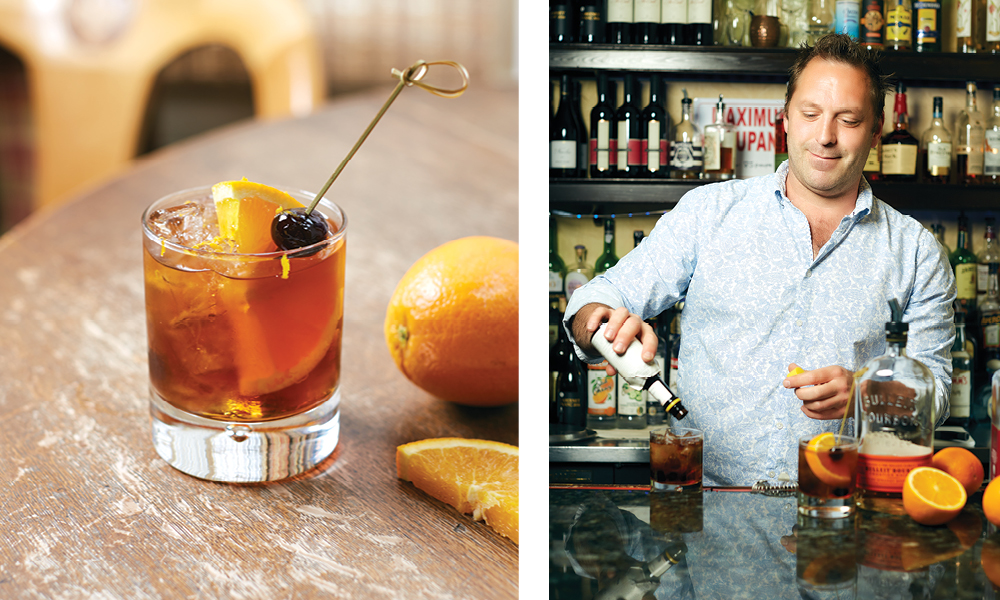 Anyone that’s been blown slightly off-course in Long Island’s wine country knows the North Fork is home to hideaways. Take for example Jamesport’s Jedediah Hawkins Inn. It’s been collecting history since 1863, most notably an affiliation with two types of spirits. Spectral sightings have been rare since its expert restoration, but you can count on an expertly-slung cocktail in a secret bar speculated to have been used as a smuggler’s cache in lifetimes past.

Behind the bar, you’ll find Colin Keillor, its manager and beverage director, whose Rusty Cage has become a signature drink here. “The Rusty Cage was actually created by the owner of Lazy Point, a bar on Spring Street in New York City,” Keillor shared. “But the bar was named after the East End town where he grew up,” bringing its origin full circle here at the Inn. “We’d held a mixology open discussion demonstration in our speakeasy, and the drink was first introduced then.”

The smoky, golden drink is what Keillor calls “a contemporary twist on one of the most identifiable cocktails of the Prohibition Era, an instant and easy choice to carry in this historic venue.” Despite it being served in an old-fashioned glass, the brands that make up the whole are modern. Keillor substitutes the muddling of the orange and cherries with herbaceous Amaro, the slightly bitter Luxardo Maraschino and orange zest. After all, “The roots of mixology are intertwined in the age of Prohibition, as bartenders had to find ways to make the illegal ‘rot-gut’ booze available palatable to their customers, which ushered in the advent of cocktails.”

Best enjoyed with rich flavors like cheese and steak, it’s available throughout the house…but we think it’s more fun this summer underground. 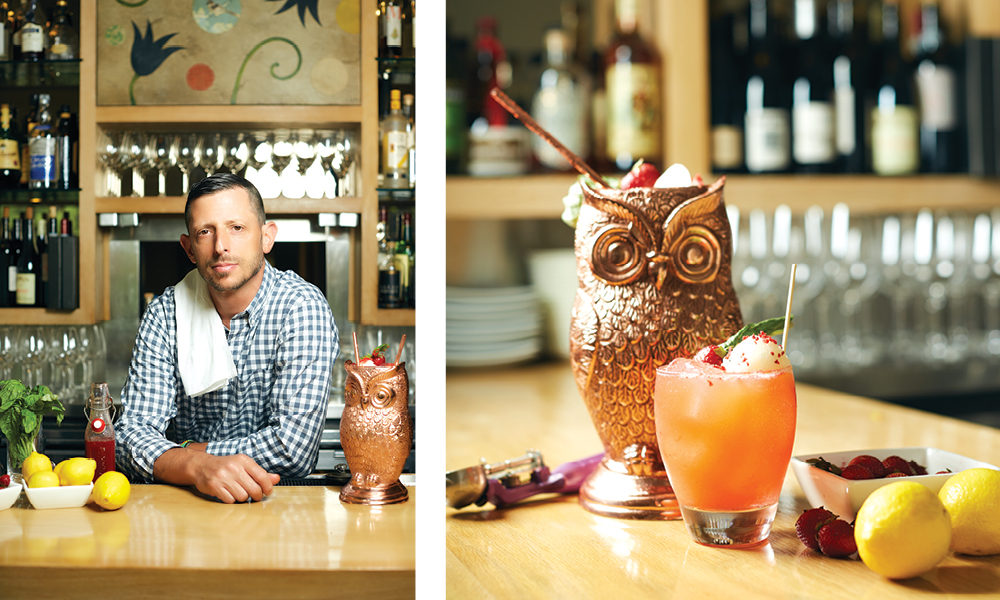 The high-falutin’ Hamptons is an obvious place for a fancy refresher. But don’t stop at the first watering hole—keep going east until you hit Nick & Toni’s, the flagship of the lauded Honest Man Restaurant Group. Here, a long list of seasonal, Italian and Mediterranean-inspired specials are served in a Tuscan farmhouse setting. But equally important, a wide range of accompanying pours are, too.

Original concoctions like the rotating recipes that occupy the Know-It-Owl, an oversized whimsical copper vessel, are signatures to keep an eye out for. This collaboration between bartender Kevin Grillo and general manager Julie Berger was a case of putting the cart before the horse. So inspired were they by the charming mug that they started coming up with shared cocktails just to fill it.

Their springtime rendition was a combination of Absolut Elyx vodka, Flaghill cranberry liqueur and cranberry ginger sorbet accented with lime zest. Despite cranberry being typically associated with fall, the drink’s zippy freshness made it a perfect pick for spring.

This summer, though, strawberries are their primary muse. “We wanted to do something with them as an early summer fruit,” Berger said of the seasonal swap-out, which includes strawberry syrup and lemon juice garnished with a special house-made sorbet—one of the details that makes the drink especially charming and warm weather-forward.

“We decided to garnish it with house-made lemon basil sorbet by our pastry chef Rachel Flatley. It adds a nice color with its flecks of green in the otherwise pink drink, and it enhances the flavor profile.” 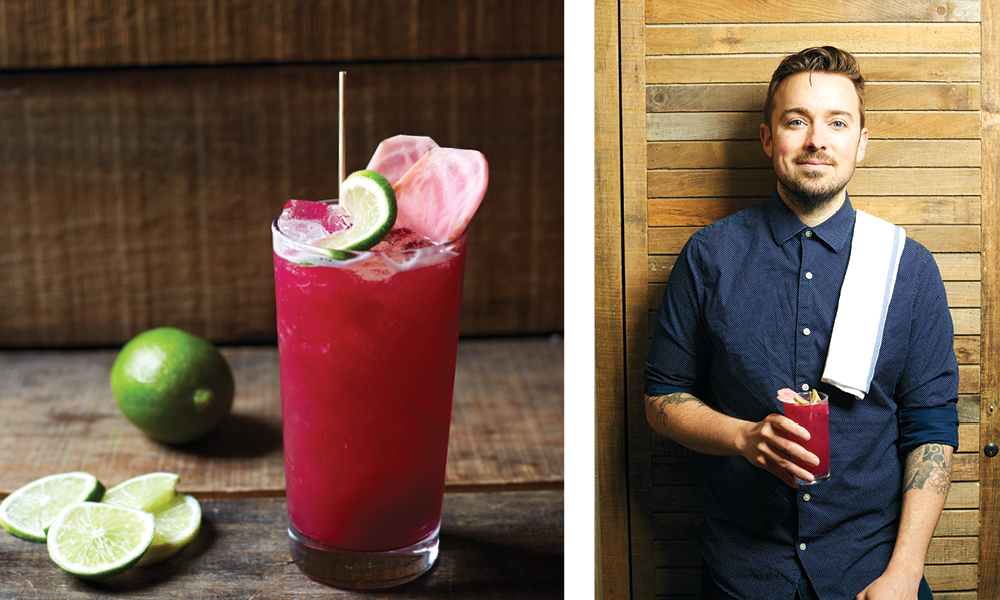 It’s appropriate to complete an imbibing journey at The End. Montauk locals can often be found at Swallow East,  a sister outpost to the popular Huntington restaurant Swallow. Open for the summer season only, this small plates-focused menu creates an exciting challenge for beverage director Derek Nielsen.

The diversity of menu items, from asparagus fries with lemon Dijon aioli to classics like lobster rolls and local clam chowder, drove the need for thought to be given to drinks pairing well with nearly any flavor profile. One of Nielsen’s favorites is Smoke Show, an obviously smoky, deep-ruby cocktail heavily influenced by his own lifestyle.

“I juice in the morning,” he laughed. “I was drinking beet juice one day and said to myself, ‘This would go great with mezcal!’ I wanted to create something earthy and had begun working with mezcal, which I love. And I try to be healthy with all of our alcohol,” as evidenced by his unusually vegetable-forward offering. It is served in a Mason jar with a house-made raw pickled candy cane beet and lime peel. However there’s no mistaking it for a generic juice.

Mixers aren’t the only source of unexpected taste moments found in Nielsen’s cocktails. “I’m always on the hunt for some esoteric brands that don’t get a lot of credit but deserve it.” A prime example is the Smoke Show’s Cráneo Organic Mezcal. It’s created by hand-selecting 100-percent organic agave distilled twice in copper pots. The detail in the distilling process captures that bold, smoky flavor, making for “one of the best mezcals I’ve ever had!”