OF ALL THE POPULAR MUSIC ARTISTS who have emerged since the 1950s, no one person has had a more distinguished, long-lasting, prolific career while being more relevant today than Tony Bennett.

Where does one begin encapsulating Bennett’s history and contribution to both popular music and jazz? Many have praised the man’s work, but perhaps the ultimate accolade came from the late Frank Sinatra, who put it simply “He’s the greatest singer who ever lived.”

Yet, what makes Bennett more than just a mere legend are the relevance and vitality of his latest work and above all the man himself. He is gracious, humble and a true fan of music. This was the man I spoke to on a beautiful fall afternoon in a lengthy interview where we spent more time talking about the present and future than about his glittering past. Soft-spoken, knowledgeable about all kinds of music and ever the gentleman, above all, Bennett will never forget his humble roots as a child in Astoria, Queens. He recalled how his father was ill and his mother would make dresses for a penny each to raise her three children during the Depression. Yet Bennett didn’t dwell on the hardship of that time but instead recalled receiving his first recording as a child, which was by Caruso, and what an influence it had on him. 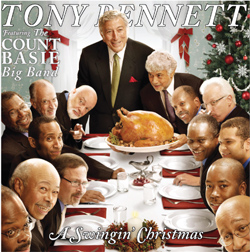 Bennett has just released a Christmas album; it is his first such recording in 40 years. Entitled A Swingin’ Christmas (RPM Recordings/Columbia) and recorded with the current incarnation of the Count Basie Big Band, the album was inspired by and brought to fruition thanks to the help of his family. One son, Danny, is his manager and another son, Dae, was the recording engineer. Bennett proudly said of his sons, “Ever since they came on the scene, I haven’t made a wrong move. Everything is done just right with great care.”

This recording and Bennett’s live show all have one thing in common and that’s the quality of the songs he sings. “If I record a song,” he declared, “it has to be well-written—the lyrics and the music. Those songs never die because they’re intelligent.”

Bennett spoke enthusiastically about jazz, yet lamented how it has become unpopular. “I regret they don’t really treat the jazz artist right because it’s really the best music in the world,” he stated. “It’s the most honest and has the most integrity. [Jazz artists] never sell out. They don’t do something just to make money. The real jazz artists are the ones that fascinate me.” Bennett has worked with many of these artists but Bennett singled out Stan Getz, Duke Ellington and his historic collaboration with pianist Bill Evans. Bennett will get a chance to raise the profile of his favorite kind of music. He has begun preliminary preparation on recording a jazz album with Stevie Wonder, which will be produced by Quincy Jones. This historic musical summit will no doubt be the most anticipated album of 2009.

Even after winning 15 Grammy awards, including Bennett Studios as part of his music empire and being an accomplished visual artist, there is much left that Bennett wants to do. When asked if there is anyone he hasn’t worked with that he would like to work with, he mentioned Michael Bublé. As for the future in general, he said, “I still have a lot to learn.”

Tony Bennett will play the Capitol One Bank Theatre on December 4th and 5th.