THE ANNUAL RITE OF SPRING IN New York that is the Allman Brothers’ extended run at the Beacon Theatre starts a fifteen-night run on March 9th. One of the newest members, who is not so new anymore, as he now has ten years’ tenure in the band, is guitarist Derek Trucks, the nephew of one of the group’s original members, drummer Butch Trucks.

Derek Trucks’ place in the Allmans’ story, his own recordings and the guest spots he has played through the years have marked him as perhaps the hottest young guitar player in music today. Solidifying his place in music on his own, he has just released the sixth Derek Trucks Band studio album, Already Free (Victor). 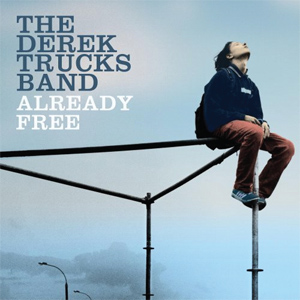 On the eve of a short solo tour, before he was to begin his stint at the Beacon with the Allman Brothers, Trucks talked with me about his new album, his time touring with Eric Clapton, the Allmans and his new home recording studio. “It feels different than other albums,” Trucks said about Already Free. “It feels like a real shift: Kind of a new chapter in the band and personally.” Recording at his own home studio has been a real joy for Trucks. “The making of this record felt so different than anything I have been a part of before. I think it was the maturing of the band and me personally, and all the years and all the things we’ve done on the road,” Trucks said, clearly relieved to have a new recording direction. “It was the first time I was part of a project that was not rushed.”

After spending many years with the Allman Brothers, and sometimes conjuring up his own interpretations of riffs Duane Allman played on the early classic Allman Brothers albums, it was a natural fit for Trucks to join Eric Clapton at some point. His first project with him was The Road to Escondido in 2006. Next was a tour where Clapton was planning on dipping heavily into the Derek and the Dominoes songbook. Of course, the album Layla and Other Assorted Love Songs that Clapton recorded with Duane Allman was a favorite of Trucks’ when he was a child and first getting into music, so the chance to do the tour with Clapton was a dream come true. Trucks talked with affection and respect about Clapton. “He is so comfortable in his place in music history and his legacy and who he is,” he said admiringly. Clapton gave everyone on stage plenty of opportunity to solo, according to Trucks. “I was shocked by how much solo space he gave me. Playing with Eric Clapton felt like a natural extension of doing the Allman Brothers. There were just so many great parallels between his music and their music and the time Duane spent with him.”

From being a small child listening to his dad playing Allman Brothers albums, to now playing alongside his uncle in the same band, Trucks has had the chance to not only live a dream, but through his playing and dedication, to also help the band keep its legendary run going strong. Trucks talks about the band with the same love he has for his own group. “The Allman Brothers is just like home for me. That was the music I was weaned on. It feels pretty comfortable to me. It’s not like I have to step outside of myself.”