William Hehir really likes the name of his band. “[MisterWives] plays off the Mormon term ‘sister wives,’” he tells me over the phone a few days before the band’s Friday gig at Terminal 5. “Mandy [Lee, the band’s lead singer] came up with it. I will never forget it: I was sitting at work one day and she texted me, ‘What do you think of the name MisterWives?’ And I immediately liked it.”

In the midst of their tour while banking off the success of their singles “Reflections,” “Vagabond,” and “Our Own House,” the band returns to their home city this week to play their New York set.

I chatted with Hehir, the band’s bass guitarist, about their musical influences, the group’s origins and how Spotify has influenced the industry. 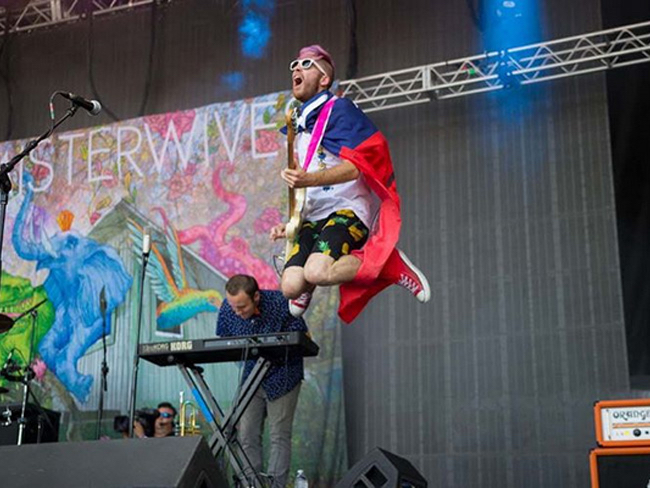 Long Island Pulse: Tell about how the band got started.
William Hehir: The band got started about two and a half, three years ago. I met Mandy through mutual friends and it was actually her birthday and she wanted to have an ‘80s cover band for her party in New York. She’d just moved into her apartment with no furniture, nothing at all, and a lot of empty space. We ended up playing together and it all worked out. She knew Etienne [Bowler, the band’s percussionist] because they worked at restaurants down the block from each other and they’d go and talk about music. She brought him on board and then we knew Marc [Campbell, the band’s guitarist] and Jesse [Blum, the band’s keys/horns/accordion/glockenspiel player] through a previous band, so we brought them on board as well.

Pulse: What’s the music writing process like?
WH: Mandy writes all the music and she’ll come up with the lyrics, melody and chord progression and we really just add on certain elements. Whatever we naturally are inclined to bring out and play is what it is. Obviously, there’s a level of thought put into what needs to be played but it goes on organically.

Pulse: How would you describe your sound?
WH: We wouldn’t want to be pinned as pop or folk, we just play music. It’s feel-good music, at the end of the day that’s the whole idea. We want everyone to be having fun. Music should transport you, whether you’re at a concert or listening on your headphones, it should take you to a place that makes you feel good.

Pulse: What inspires your music? Who are your musical influences?
WH: Collectively, we would all say No Doubt. Both individually and as a band. But, in the course of the last two-and-a-half years, we have learned how to navigate towards all other influences.

Pulse: What are your favorite venues to play in New York?
WH: It’s honestly been an honor to play in each and every one of the venues. These venues are where we went and saw music and it’s nice to get to play there.

Pulse: Clearly, the Internet in general and Spotify in specific have heavily influenced the music business. What are your thoughts about it?
WH: The way I see it and the way we collectively all see it as a band, is that whatever resource or whatever means are to get the music out, we are all supportive and greatly appreciative. At the end of the day, we love recording music, but the heart and soul is to play shows. You’re not going to make money from album sales, you know that going into it. But Spotify and all other vendors provide people with access to listen to you and, hopefully, by the end of the day, they like you enough to buy a ticket to a concert. It’s about getting the music into people’s hands. We play music so that it can be shared.