I got knocked around
And then gathered what I found
Didn’t mean a lot
Give a glimpse of what yer not
From “Knocked Around” by Dinosaur Jr.

After celebrating the 30th anniversary of their eponymous debut last November, Dinosaur Jr. is ready to release their first full-length since 2012’s I Bet on Sky. Recorded over the past year at Bisquiteen Studio in Amherst, MA, Give a Glimpse of What Yer Not will awaken fans out of a summer stupor. The 11-song LP covers the usual topics of miscommunication and isolation, but there are more tunes about love and heartbreak this time.

While lead singer/guitarist J Mascis said their latest effort is more drum beat driven than guitar-heavy, songs like the driving opener “Goin’ Down” and the epic “Good to Know” will not disappoint guitar fans. The first single, “Tiny,” is reminiscent of early 90’s Dinosaur with Mascis’s signature guitar sounds, Lou Barlow’s melodic yet distorted bass and Murph’s frantic drumming. But J’s trademark nonchalant twang is more heartfelt as he sings: “Boxes overflowin’ when I see you/ Fear is that I can’t be friends for long.” 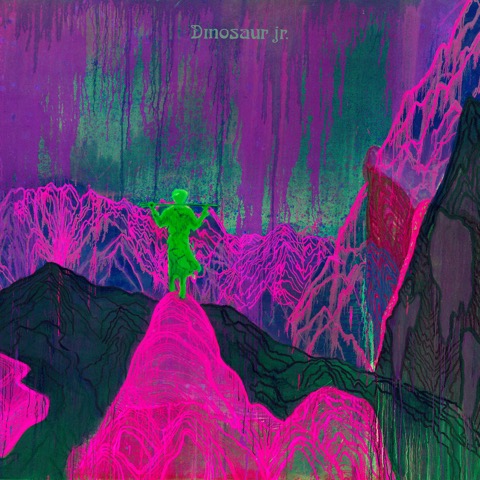 Barlow sings the two songs he penned, “Love Is…” and “Left/Right,” which have a fuzzy, folk/rock Byrds feel and a similar heartbreak theme—albeit with what could be a political bent in the vein of love trumps hate on “Love Is…”: “Here comes the age where forgiveness is a sin/ If you’re still so full of rage that only poison lets you in/ Don’t forget it and don’t deny what you saw/ Love is the law/ Let it pin you down/ Till you tell the truth.”

Give a Glimpse of What Yer Not has been called one of the alt-rockers’ most pop-oriented records, but it also contains what could be a grunge classic in “I Walk for Miles” with its monster riffs and nihilistic lyrics. Overall, Give a Glimpse is Dinosaur Jr.’s best record since they reunited in 2005. When asked how their sound has evolved from their debut release over thirty years ago, Barlow told Pulse: “‘In many ways it’s much simpler. Is that evolution? J’s tone evolved into a carefully curated crunch. I think we found our sound a year or so after the first record and what we do now is even simpler than that.”

Dinosaur Jr. start their world tour on Friday, August 5th, the same day their album debuts on CD, LP and digital formats. Get ready for them to crank the Marshall amps up to 12 and check out tour dates.