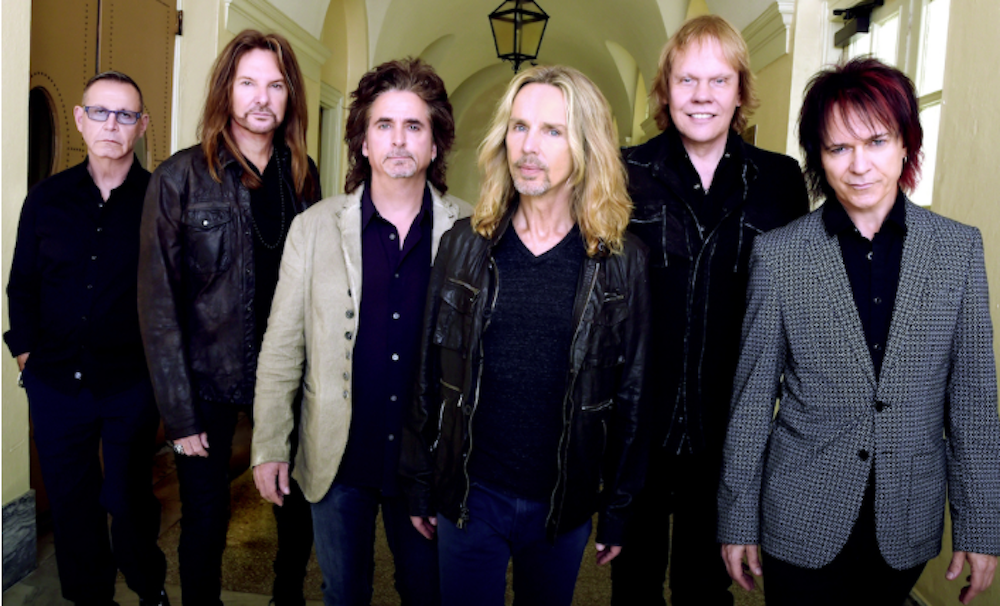 Concept albums and rock music are a tricky proposition. Some have resulted in classics (The Who’s Tommy, Pink Floyd’s The Wall), while others have been missteps (Kiss’ The Elder, the Metallica/Lou Reed collaboration Lulu). Styx is one of the few bands whose concept albums could fall into each category. Paradise Theatre from 1981 belongs to the former spawning the hits “Too Much Time on My Hands” and “The Best of Times.” On the other hand, 1983’s Kilroy Was Here lands in the latter with the kitschy “Mr. Roboto” and a tour featuring a highly theatrical stage show requiring acting/dialogue from the band members.

The group—led by longtime members Tommy Shaw (vocals, guitar), James “JY” Young (guitar) and Chuck Panozzo (bass)—is back at it again. Styx’s 16th studio effort, The Mission, sees a bold return to the conceptual format. Styx bassist/guitarist Ricky Phillips spoke with me about the new project prior to the band rocking Jones Beach Theater on August 16 with REO Speedwagon and Don Felder.

Styx has a new album out.
Some people may think we’ve lost our minds because there have been some crazy issues with Styx and concept records, and I think most people would think we’d never do that again. But Tommy Shaw came up with a really cool idea. It’s based around in our lifetime that we will see people landing on Mars. And The Mission became Tommy’s first mission to Mars in his head.

It’s ballooned up for our age group because, as kids, we went from cowboys to wanting to be astronauts in the 50s. He dove in and wrote an amazing storyline that is very interesting musically. It uses a little bit more of a pallet of emotions and everything from heavy rock to prog…all the touchpoints that Styx has been known for—from pop and really hooky vocal-laden material. It was a really good place for him to go to capture all that.

Does the storyline involve humans living on Mars?
The Mission refers to the first mission on Mars and inhabiting Mars. I would recommend headphones; there is a lot of “ear candy” going on in the production.

And since the concept deals with living on Mars, has Styx ever discussed the possibility of being the first rock band to ever play on Mars?
[Laughs] I don’t know if we’ve gone that far! One thing at a time. First of all, we will promote the record and see where it goes. Through this process, we have developed a relationship with NASA and have been invited to a few of their facilities around the country, and that’s a cool thing. But I think that’s the extent of it.

The Mission captures the spirit of the band from the 70s and 80s.
We wanted to recreate the sound that Styx has been known for and not introduce something brand new. We really wanted it to have the “Styx sound” all the way down from vocal arrangements to sounds and tones, and choices of guitars. It will sound friendly. It won’t sound like something foreign to Styx listeners. It’s a continuation of a sound that has gone on for decades.

Of the classic Styx tracks, which are your most favorite to perform in concert?
“Fooling Yourself” is a really cool track. I love playing in odd meters and it goes from 4/4 to 6/8…actually, I think there are three time signatures in that song. When the mood changes with the tone of the music like that, it really tells the story better. It’s excellent songwriting by Tommy Shaw, and one of the coolest songs Styx has ever done. “Renegade,” just pounding out some rock n’ roll, that’s always cool. A lot of fun. I like “Suite Madame Blue”–it’s a very Zeppelin-y sort of a track.

I love Queen a lot and everything they were doing. In my estimation, Styx was very similar in musical approach to Queen back in the 70s. So I like to play that stuff, all the way up to The Mission, which is very seasoned players who will not overplay. I love that about this band. We can still play with simplicity and do it with fervor and tear it up, and really appropriately convey a song rather than just destroy it, which I’ve seen lots of bands do. The arrangements are well thought out, the lyrics are scrutinized and the harmony parts are not easy, but we try to make it appear as though it’s easy so people can sing along with the chorus. And a lot of our fans do. That kind of sums it up.