Distilling: purifying a liquid by vaporizing it, then condensing it by cooling the vapor and collecting the resulting liquid. Unlike beer and wine, a spirit requires this process, which takes place after fermentation has turned sugars into alcohol. And Long Island has seen its share of distilling.

Our history is rife with tales of bootleggers, speakeasies and secretive stills during Prohibition, yet legitimate distilling never regained momentum after the 18th Amendment was abolished. Recently, Governor Andrew Cuomo has been relaxing regulations as a bid to promote the agricultural economy and that is having a huge effect on our spirits.

Long Island Spirits began by producing only potato vodka. After sourcing the potatoes, the artisan distillers mash, ferment and distill the wash through the twin 650-liter, custom-made copper pot stills equipped with 30-foot-tall rectification distillation columns. The operation now includes bourbon, gin, whiskey and a recently released corn-based vodka dreamt up by new head distiller and Kentucky native, Brandon Collins. “The raw materials are different so they have a different flavor,” owner Rich Stabile said. “The [original] LiV Vodka has more of a creamy mouth feel, where corn-based vodka is a little more on the sweet side.”

The company’s Baiting Hollow distillery and tasting room, opened in 2007, is rich in Prohibition-era lure—legend has it that the barns’ cupolas were used to hang a lantern to signal if the coast was clear for rum runners to smuggle in their illicit hooch.

But Stabile is no longer the only name in the game. A handful of distillers have cropped up on the East End in the last several years—wineries are even getting into the distilling action, using grapes to make brandy and even a pink gin. 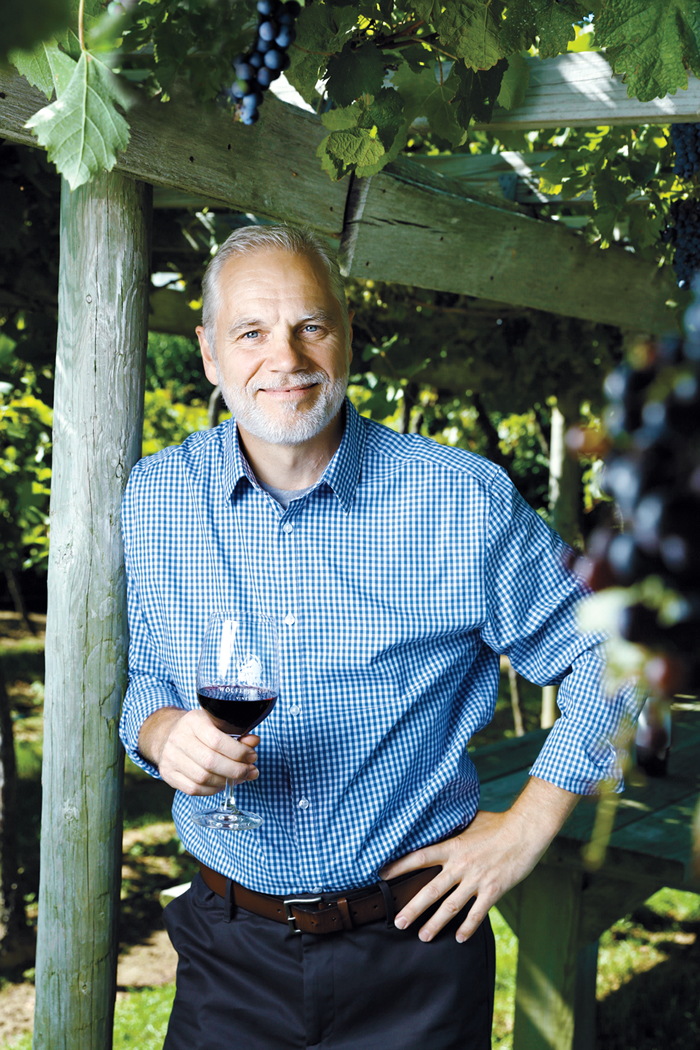 Although he’s best known for his vino, winemaker Roman Roth is putting his colorful touch on Wölffer Estate’s Pink Gin.

Wölffer Estate winemaker and partner Roman Roth has a penchant for turning all things pink into gold. The Sagaponack winery’s celebrated Summer in a Bottle rosé flies off shelves every year. It’s also the underpinning of Roth’s innovative Pink Gin that Vogue Australia recently dubbed “the new frosé.”

Roth has been eager to make gin since he earned his distilling and enology degree in 1992 in Germany. “For our main flavoring, we use juniper berries picked by hand from the bushes at our beautiful estate,” Roth said. “Fine hints of anise, fennel, coriander, cumin and cardamom are also added, along with fresh mint from the garden.” The process begins with a copper pot still made by famed German manufacturer Christian Carl. Roth purchased the equipment years ago with aspirations of one day producing a true Hamptons gin. Because distilling isn’t Wölffer’s bread and butter, Roth can afford to distill at a slow pace and use only the purest alcohol, discarding the rest. A small amount of grape skin extract creates the unmistakable pink tint. “Using our rosé wine as the base gives us a clear advantage over grain-based gins. The aroma is much more playful and fruit-driven. And because of our strict and more generous cuts, we have a fine gin.” 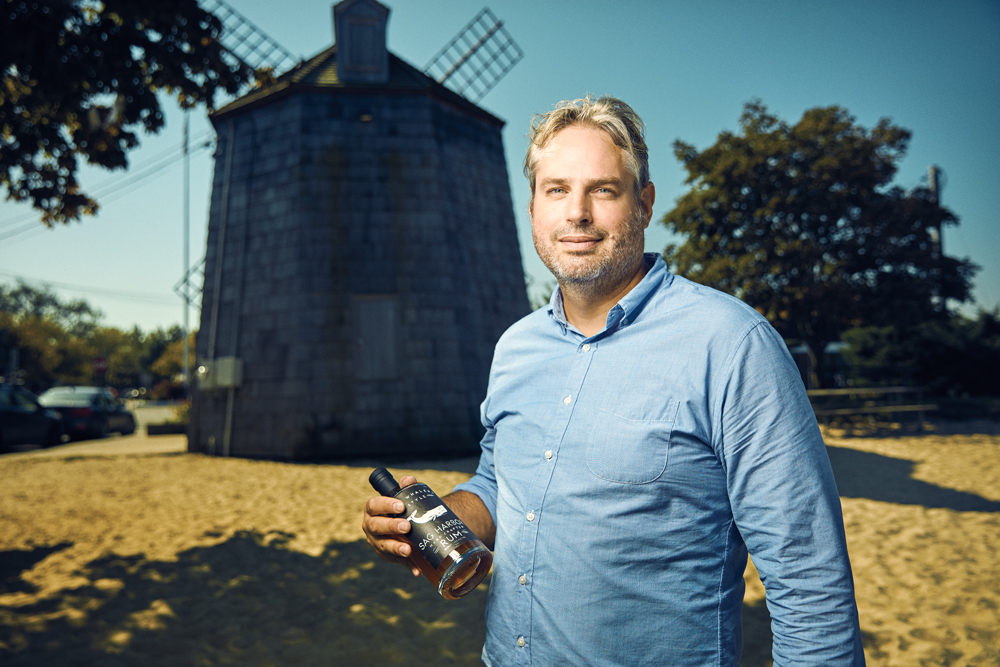 Jason Laan imports the base spirit from the rum capital of the world, the Caribbean, before adding signature spices to create the unique taste of Sag Harbor Rum.

Wine is Fine, But…

Through a partnership with Long Island Spirits, North Fork wineries including Sherwood House and Sparkling Pointe are turning excess chardonnays and pinot noirs into brandy. “They bring us their wine, we distill it, then we age it in French oak—it has to be aged a minimum of three years in French oak to be called brandy—then we legally have to bottle it, package it and label it for them. Then they sell it out of their tasting rooms,” Stabile said.

“Everyone wants to see local products succeed so there is a sense of camaraderie in the industry,” said Jason Laan of Sag Harbor Rum, which imports its base spirit from the capital of the rum world: the Caribbean. Sag Harbor is aged at Long Island Spirits in old bourbon barrels for more than a year and is infused with a blend of spices and fruits that gives it a slight sweetness. “We’re following the history of rum in the Americas,” Laan said. “We chose a set of flavors that reflected the rum running on Long Island when the whalers returned back from the Caribbean and used whatever [coffee, exotic spices and fruit] barrels they had on board to store rum. One of the biggest things craft has done is allow people to expand their palate and try new things.” 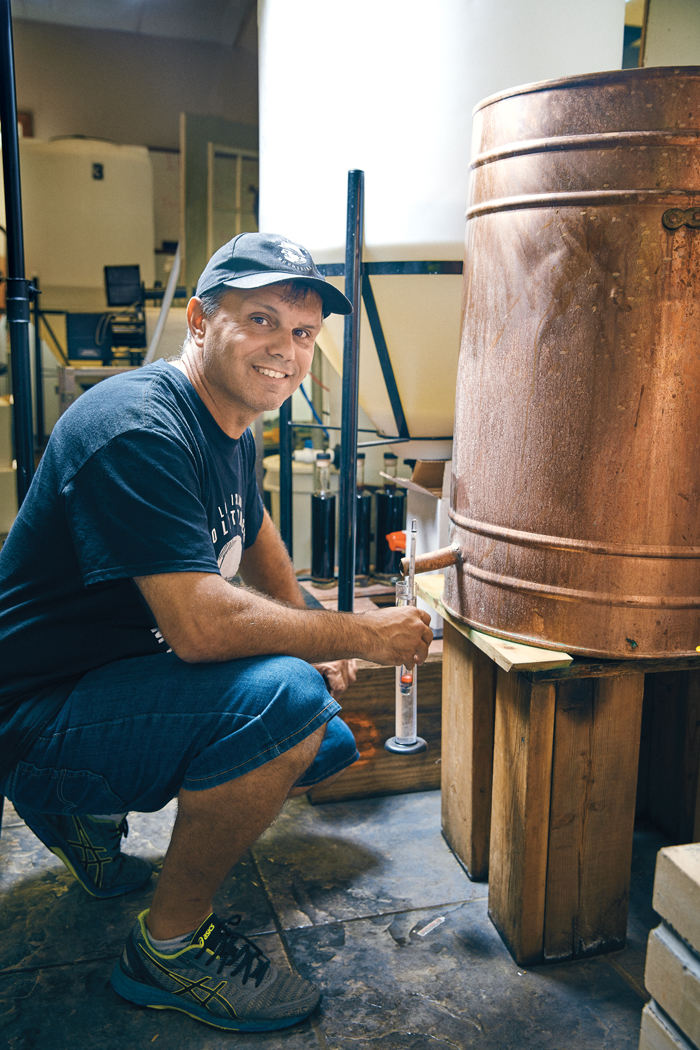 Distilling is in Joe Cunha’s blood and these days he’s applying his skills to making LI’s premier “fanciful corn whiskey.”

What’s in a Name

Joe Cunha, co-owner of Twin Stills Moonshine in Riverhead, prefers to make his spirits in house. Though moonshine is an illegal alcoholic beverage, Cunha insists his is in name only, saying “moonshine is a fanciful name for corn whiskey.”

Cunha’s distillation roots stretch back generations. “The reason I started distilling was my great-grandfather. He started in 1926. He was born in Iowa and then moved to Portugal at the age of 14. I used to go Portugal in the winter and the stills in the winter would run for like three or four months straight. I use the same techniques they did.”

Cunha’s recipe starts with a locally-sourced corn mash. It’s fermented for weeks before being transferred into the still, pulling the alcohol out of the mash. The spirit is infused with seasonal flavor. Favorites include apple pie, which is aged in American oak, and strawberry, with the fruit sourced from neighboring Wells Farm. “We use all natural ingredients, so we made pumpkin spice [when we had] pumpkins. We’re releasing chocolate again for February for Valentine’s Day.”