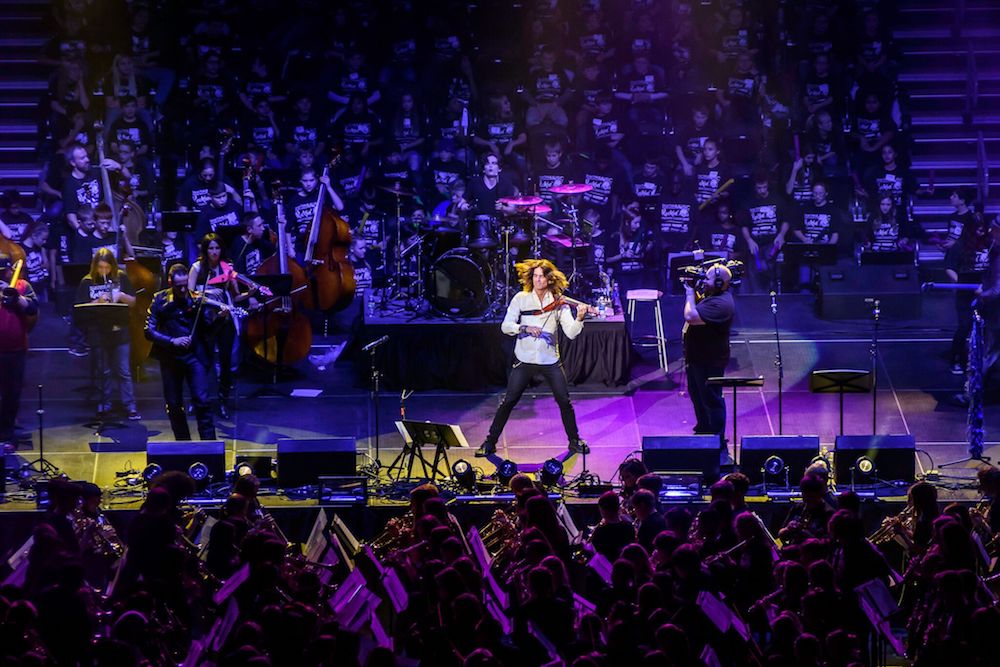 Mark Wood is best known for his musical pyrotechnics and flamboyant stage presence as the former lead violinist in the Trans-Siberian Orchestra. But he’s charted a dynamic solo career with his own band The Mark Wood Experience. He’s notably a pioneer in the development of electric violins (known as the Viper), electric violas and electric cellos through his company Wood Violins. Though he’s based in Port Washington, his electric string instruments are produced in Huntington.

Wood is also on a mission to influence a new generation of musicians. His “Electrify Your Strings” program tours high schools around the country to educate students about the special attractions of the electric violin. “They like the wah-wah pedal, the echo and all the effects the instrument affords. They really like to manipulate the sound,” said Wood, whose latest album, Turbow, showcases some of his most powerful and awe-inspiring electric violin work to date.

Before performing with a student orchestra at the East Setauket High School on April 25, Wood spoke more about the electric violin revolution.

Turbow, your latest album, seems to have a heavier sound. Was the album geared more to a hard rock audience?
The record reflects who I am and where I am right now; it especially displays the fluidity and flexibility of my music. I’m a big fan of Zeppelin and Hendrix, but Turbow wasn’t intended to be a hard rock record.

Do you expect electric string-driven musical works to become more common soon?
Absolutely…Many major musicians are using that electric violin, from Lindsey Stirling to Mark O’Connor. YouTube has created a whole new music industry, which has really helped us. In fact, there have been 10,000,000 views on YouTube of musicians using my electric violin.

How has your Long Island background shaped your musical experience?
It had a big influence on me. My parents had deep roots on the North Shore. [Wood’s mother was a concert pianist and his father was a painter.] At one point in the 70s, Long Island was at the epicenter of the rock music scene. A lot of great bands came out of Long Island then, such as Twisted Sister and Rat Race Choir. I had a chance to play at four clubs in the Port Washington/Roslyn area at one time early in my career. I’ll note that many original members of the Trans-Siberian Orchestra were and are from Long Island, including Al Pitrelli.