Blue Point Brewery is undergoing a literal shift. Over the next several months, if all goes according to plan, the entirety of the Patchogue-based brewery’s local production will migrate, piecemeal, from its original River Avenue location to a brand new brewery just south of Patchogue Lake—a straight-shot half-mile north along the Patchogue River.

According to brewery co-founder Mark Burford, the new facility marks the third act for the 20-year-old operation—the first being its founding in 1998 and the second, its sale in 2014 to Anheuser-Busch InBev (AB InBev). But with Burford having settled into a decidedly backseat role following the buyout, the Patchogue Lake brewery is largely the vision of Blue Point’s current brewmaster and director of operations Dan Jansen and his right-hand man Mike “Stoney” Stoneburg.

Jansen, a trimly bearded, low-key Midwesterner who’s brewed professionally for nearly 15 years, came to Blue Point just three years ago from Anheuser-Busch’s St. Louis brewery, where he worked as assistant brewmaster. He was looking for a more creative and experimental brewing experience than what he was getting in St. Louis, and through his contacts in The High End, the “craft” arm of AB InBev, got an offer to run Blue Point. “They really embraced me and gave me this opportunity to brew some new, exciting and creative beers, and to lead the production side,” Jansen said.

Those two points, along with the chance to design and build a brewery like the one he’s about to open, aligned with Jansen’s three ultimate career goals. “I honestly thought I’d have to take three different jobs with three different companies to accomplish them all. To have them all come together at Blue Point, at once, in this neat, perfect storm was pretty awesome.”

The new brewery Jansen designed is positioned on the former site of the Patchogue Manufacturing Company, a World War II-era lace mill on Main Street in downtown Patchogue. The original compound, which suffered a series of fires in the 1970s and sat derelict until its demolition in 1998, featured a clock tower that rose above a sprawling, interconnected campus of brick buildings totaling more than 200,000 square feet. The modern building housing Blue Point’s new brewery is somewhat less stately—it was constructed in the 2000s as a commercial and retail property with recent tenants including Briarcliffe College and Flo’s Luncheonette—but a new clock tower pays homage to the site’s history.

Inside, Jansen’s installed a sea of shiny new stainless-steel brewing equipment. At its center is a five-vessel, 60-barrel, German-engineered Rolec brewhouse capable of handling eight to 10 brews per day, up to 150,000 barrels annually. It’s a big leap for Blue Point, which currently brews just 10,000 barrels per year at River Avenue. Jansen said the plan is to start slow—he’s installed only enough fermentation capacity for roughly 60,000 barrel per year—and eventually fill up the extra fermentation space over time. This means an initial production increase of four to six fold.

Also on display is a new hi-tech packaging line capable of filling 12-ounce bottles and cans for six-packs and 12-packs, 16-ounce cans for specialty four-pack releases, and 375-ml and 750-ml cork-and-cage bottles for limited one-off beers. The line’s automated kegging feature can fill up to 60 kegs-per-minute.

That’s not all. A state-of-the-art QA lab will compare how beer made at the new brewhouse matches that from River Avenue. On the street level, a warm storage room for conditioning Blue Point’s famed cask firkins will be visible to passersby. Later this summer, a new second-floor taproom and restaurant will open, with windows looking down at the production and packaging areas. In one corner, a raw oyster bar, and in another, a live music stage. More windows and roll-up garage doors will provide sweeping northern views of Patchogue Lake.

The new facility will serve as a creative outlet for Jensen and Stoneburg, whose friendship dates back more than a decade. The pair met in the mid-aughts while working in St. Louis and soon began collaborating on recipes. “We started homebrewing together on weekends, after brewing [at Anheuser-Busch] all week long and coming up with different beers,” Stoneburg fondly recalled.

They took different paths professionally—Jansen stayed in St. Louis while Stoneburg “went and made malt for a couple years,” he said, and then brewed in Chicago at Goose Island, another AB InBev/The High End subsidiary—before reuniting in Patchogue in 2016. 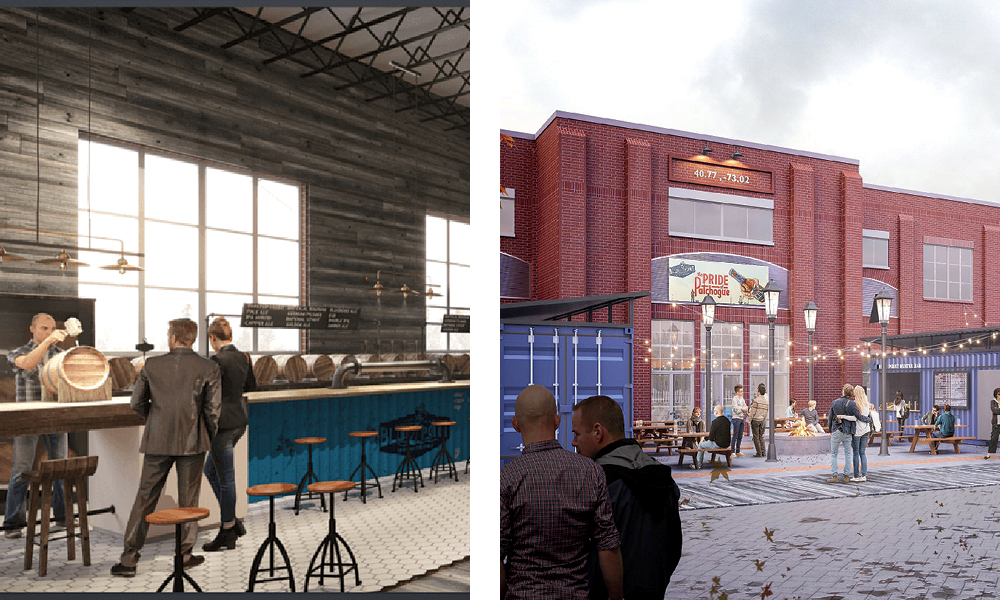 The opening of a second-floor taproom is just one of the additions beer lovers have to look forward to later this summer. / The brewery’s new location will increase production and add to Patchogue’s bustling nightlife scene.

“Dan was out here looking for someone he knew that could help build the brewery and be part of this company,” Stoneburg said. “That’s when he asked me to come out and partner up and get this thing going.”

Other recipes expected from the new brewery have their beginnings in Jansen’s and Stoneburg’s early homebrew sessions. “Some of the ideas—not the exact recipes but the roots of the recipes—started with our collaborations,” Jansen claimed. “Honey Robber [Blue Point’s cream ale] had a start in a garage in Missouri. Mike and I both have uncles who are beekeepers, so the idea of Honey Robber started way back then, getting honey from them and using it in a beer.”

Additionally, a new series called Catch of the Day will highlight brewery-only releases, while a rotating line of specialty oyster beers will be available in large-format 750ml bottles.

To help all these new beers see the light of day, Jansen has nearly doubled Blue Point’s production team. “Luckily, we’ve found a lot of good people locally here that are passionate about brewing. We’re not the most uptight group of brewers—we like to have a beer together after our shifts—and the people we’ve hired fit in. Our highest success rate has been hiring locals.”

He said the brewery hopes to extend that local flavor to collaborations with Long Island breweries. “Anytime you can share ideas, it’s an opportunity to grow as a brewer. We’ll have a lot of offers extended because of the space we have at the new brewery.”

In the meantime, Jansen and Stoneburg are hard at work getting the brewery up and running (the first test batches hit tanks in early May). And once the beer starts flowing from the shiny new taps, it will be a dream realized for the duo.

“Mike and I had talked about doing some together for a long time,” Jansen said. “But for me, it was always going to be a later play in life, like a retirement thing. To get the opportunity to do it with Mike for a company that we love and respect and has treated us like part of the family, it’s a dream come true.”

“It’s definitely been a long road over the last couple years,” Stoneburg added. “But we’re coming to the top of that hill, and we’re super excited about watching it come to fruition.”