While Crosby, Stills, Nash and Young might be permanently on ice, its individual members are moving forward into a future they are creating on their own terms. They are each carving a unique musical path that their lifelong fans can still relate to and enjoy, while beckoning new, younger sets of ears in the process. A new collection of songs from Graham Nash is designed for that broad spectrum of appeal, and its creator is happily anticipating its release. Over The Years is a 30-song compilation spanning 50 years of music, including unreleased demos and mixes, due out on June 29 from Rhino Records.

On a beautiful late spring afternoon in Manhattan, I caught up with the two-time inductee into the Rock and Roll Hall of Fame to discuss the new album and spent a good hour exploring the Renaissance Man-like range of Nash’s interests, knowledge and experience.

As the self-appointed curator of the CSN catalog, you have spent years compiling boxed sets of your former band, plus Crosby’s Voyage, Stills’ Carry On and your own Reflections. Now, with the impending release of Over The Years, you are continuing the archival process. It’s a curious thing: As one who is known for looking forward, always on the lookout for all things new, whether it is music, photography or other art, your eye toward the past is eagle-sharp. How do you reconcile living in the now while devoting years of your life toward preserving the past?
I like to do both! I don’t look back. That’s why on the cover of Over The Years, there’s this kid with binoculars looking, to me, in my heart, into the future. He’s not turning around looking backwards.

Given your vast body of work, how did you go about selecting the songs for inclusion in this album?
I think I based it a lot on what my audience expects to hear. They expect to hear “Teach Your Children,” “Our House” (and) “Wind On the Water.” They want to hear “Chicago,” “Military Madness,” “Just a Song Before I Go” (and) “Wasted On the Way.” So, I started with them. And I realize, of course, that most people have heard all those songs, maybe a couple of times. To make it interesting, I said, “Well, why don’t I just put the very beginning—once again, going back to the past and the future—why don’t I put the demos on there and let people realize how I wrote the song?” With this particular record, Over The Years, people are finding that fascinating, because if people don’t write music, songwriting is like a magical thing. “What the fuck? How do you do it?” And very often, we don’t know! I mean, I don’t know. I know what happens, I know that I see something that I have to feel deeply about, and then I think about it. I have this conveyor belt in my mind that has melodies that I wrote and words that I wrote that haven’t been “songed” yet, you know? And I’ll think about something and go, “Yeah, I’ve got the title!” And if I’ve got a title, then I’ve got the first verse, and that’s how I write.

When you went back through your archives, did you find yourself reliving the moments of these songs’ gestation and infancy?
Yes, obviously, because music is such a large part of my life, and of course, I still have a brain and I still have a memory and I still remember doing those demos. There’s a certain excitement you’ve got to (capture); I need to put it down somewhere so I don’t forget it. I don’t write music. None of my friends write spiders on a white page; we don’t. So, consequently, there have been several songs that you think of on the end of sleep and you think, “Oh, I’ll remember this tomorrow,” and then you forget it. Me and Stephen (Stills) and Michael McDonald once wrote a great song at Stephen’s house. We’d been partying all night and we wrote this beautiful song, and none of us can remember what the fuck it was about! 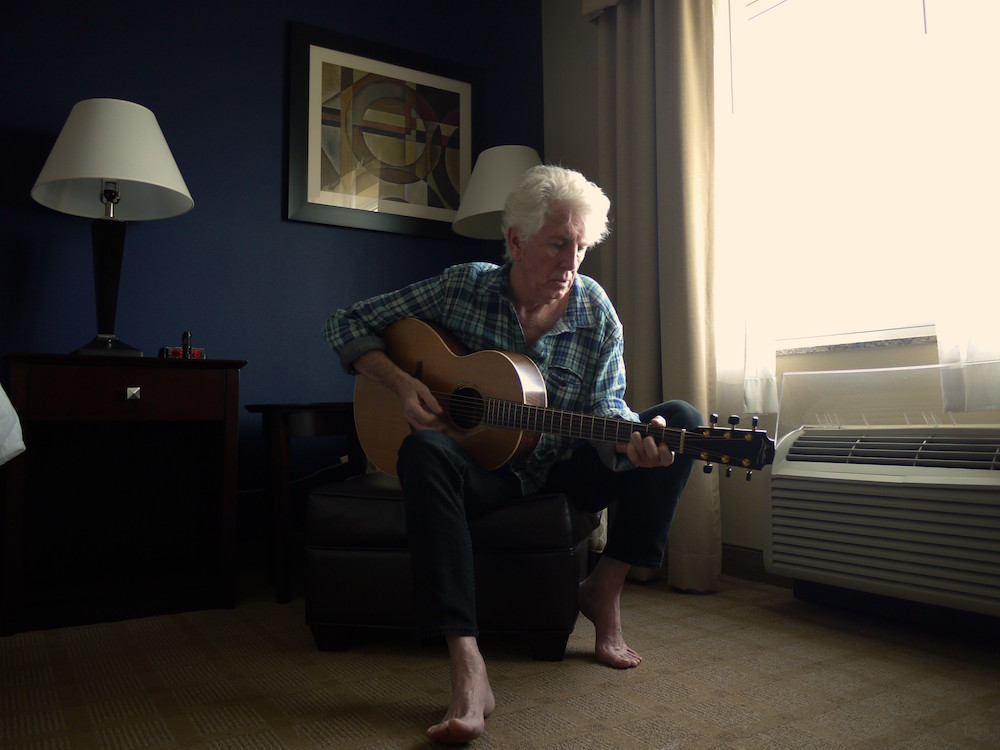 I spoke with David at the end of April and one of the things he mentioned was that he is receiving increasing calls from fans through social media for the resurrection of CSNY to reclaim its voice as a collective spokesperson for our troubled times. I can only imagine that it puts pressure on you.
It does! Well, I understand people’s love for it. I mean, I love it too. Part of my sadness is the loss of the music. Just because I just don’t like Crosby right now and don’t want to be with him at all and don’t want to sing with him, I mean…we lost a lot of music. With all due respect, when he said all that awful shit about Daryl Hannah, what do you fucking think Neil Young is gonna say to you after you’ve said that in the press? Do you think he’s just gonna ignore it? Fuck no! David Crosby kind of tore the heart out of all of it, and it’s sad, but that’s the way it is. If we never make another note of music, look at what we did in the last 45 years.

Do you have a bucket list of those with whom you’d like to collaborate?
There’s one thing I would still like to do before I die. I would love to be onstage with Paul (McCartney) with just his acoustic guitar, singing “Yesterday” with me singing harmony. What a song really, you know? And Paul has got one of the greatest voices in the world as far as I’m concerned. So that might be interesting. I keep imagining what I could bring to that song. It doesn’t need anything; it just needs Paul and an acoustic guitar, I know that, but I think I can add something that would make Paul really smile while we’re doing it.

Would the 25-year-old Graham Nash be surprised by what the Graham Nash of today is doing? It’s a strange question…
It is a strange question. You know, we never thought that…rock and roll was such a youth-oriented music that it’s hard to think of rock and roll and 60 year olds. They just don’t quite go together, you know? Was it Jagger that said, “Don’t trust anybody over 40?” I’m 76 now, are you kidding?! But I still have the same insane passion for music. People say, “Well, you’re 76, you’ve done a lot of stuff. Are you coming to the end now?” And I’m going, “Are you fucking kidding? There’s so much to write about in this world, you know?” I’ll be writing when they’re lowering my fucking coffin lid.